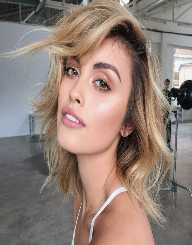 Kylie Minogue was born on May 28, 1968, in Melbourne, Australia. Her parents are Ronald Minogue and Carol Jones. She also has two siblings: Dannii Minogue, who is also an actress and singer; and a brother, Brendan Minogue.

Before Kylie Minogue began her professional singing career, she tried her hand at acting. She was in several Australian soap operas when she was a child. Her sister, Dannii, also worked alongside her in many projects.  Her most famous role in a soap opera was for her work on the famous Australian soap opera, Neighbours. Some other shows she was on were Skyways and The Henderson Kids.

Kylie Minogue is famous for her pop tunes. She was first noticed at a benefit concert in 1986, where she sang one of her most famous songs (which is a cover), The Loco-Motion. After Kylie was noticed, she signed onto Mushroom Records in 1987. She then recorded The Loco-Motion, which instantly became a chart-topping favorite in Australia. Some of her famous albums are listed below.

Between the end of the 1980s and the first couple years of the 1990s, Kylie Minogue released four albums, all which sold like crazy. In 1994, she left Mushroom Records and signed on with Deconstruction Records. She left this company in 2000 and signed on with Parlophone in the same year. She continued to work with this group for years.

Kylie was most famous at first in Australia, with her fame spreading next to England, and then the United States. She sold millions of albums as well as singles. Her songs, when they first came out, were almost always on the top-ten list, if not in the number one spot! The star has many tours and even a documentary about one of her trips.

Once Kylie Minogue became more famous because of her singing career and good looks, she began to star in more prominent roles. She worked on The Delinquents, which helped to raise her popularity even more. She even had an appearance in several favorite movies such as San Andreas and Moulin Rouge. She also starred in Jack and Diane and Holy Motors.

Kylie Minogue has been a fashion icon for years with her looks on the stage. Eventually, she decided to partner with H&M to make swimsuits and other beachwear. Later, she went on to build her lingerie brand, named after herself, called Love Kylie.

Kylie Minogue has won a Grammy for her song Come into My world. She has been nominated for four other Grammys as well.  She also earned four ARIA Awards and two Brit awards for her music.

In 2008, Queen Elizabeth II gave Kylie Minogue the honor of being a member of the Order of the British Empire because of her success as a musician.

In 2005, Kylie Minogue was diagnosed with breast cancer. With the diagnosis, she also canceled her Australian tour and began treatment right away. She spent some time getting chemotherapy, and she ended up having to get surgery as well. During this time, she stayed out of the spotlight so she could focus on her recovery, and also so she could have some privacy. Later that same year, she released a digital single to let her fans know that she was doing well again.

Kylie Minogue has never been married, and she has no children. However, she did become engaged to her longtime boyfriend, Joshua Sasse, in 2016.