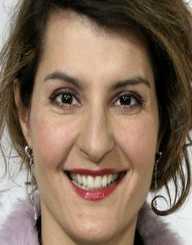 Nia Vardalos was born on September 24, 1962, in Winnipeg, Manitoba, Canada. She is a Canadian- American screen writer and actress. She has featured in several television shows and films including ‘My Big Fat Greek Wedding’ which debuted in 2002 and ‘Team Knight Rider.’

Nia Vardalos was born Antonia Eugenia Vardalos to a land developer Constantine Vardalos and Doreen Christakis in Winnipeg, Manitoba, Canada. She was born on September 24, 1962. She went to St. George School and later attended Shaftesbury High School in Winnipeg. After completing high school, she enrolled at Ryerson University in Toronto on a scholarship in 1986.

While in Toronto she became a member of the Toronto Second City Theatre Troupe in 1988. She later left for the Chicago City Stage before moving to Los Angeles where she appeared in television sitcom such as ‘The Drew Carrey Show’ and ‘Two Guys and a Girl.’ She also did a voice character for ‘Star War: Return of the Jedi’ in the 1996 radio adaptation of the film.

Tracing her ancestry from Greece Nia Vardalos soon began scripting a stage play which she titled ‘My Big Fat Greek Wedding.’ At first, it was only comprised of one character of a woman in play but sooner it impressed actress Rita Wilson and her husband, Tom Hanks. The couple adapted the play into a film and engaged Vardalos as the screenwriter.

In 2002, the film ‘My Big Fat Greek Wedding’ debuted in the screens with a 5 million US Dollars in a sale and became the hit film of the year. In the end, it had drawn a large number of up to 370 million U.S Dollars globally. The film also earned her three awards including Academy Award Nomination for Best Writing, a Screen Actors Guild Award Nominations, and Golden Globe Nominations for Best Actress in a Motion Picture Musical or Comedy. In 2004, she wrote another film titled ‘Connie and Carla’ in which she also co-starred with Toni Collette. The film depicted two ideal women who went undercover disguising themselves as drag queens.

In 2011 Nia Vardalos co-wrote the romantic comedy film titled ‘Larry Crowne’ with Tom Hanks. The film became a success earning her about 59.8 million U.S Dollars as the gross income. She was also scheduled to star in two films including ‘Talk of Town’ (2012) and ‘A Wilderness of Monkeys’ (2013). Apart from films she also appeared in interviews like ‘The Dialogue’ and also wrote a book titled ‘Instant Mom’ published in 2014.

In 2016, she featured in ‘My Big Fat Greek Wedding 2’ as the starring and producer of the film as well. She was also the screenwriter of the same film which received worldwide acclaim. In 2015 alongside Gomez, she hosted a show known as ‘The Great American Baking Show’ but never became popular due to marriage hickups between the couple.

Nia Vardalos was married to Ian Gomez in 1994 and together had one child. The couple divorced in 2018. She is currently fifty six years old.