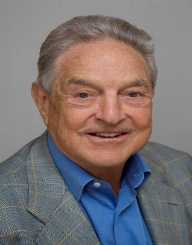 George Soros was born in Budapest in Nazi-occupied Hungary to middle-class Jewish parents, Tivadar and Erzebat Schwartz. His father was a lawyer and had been a prisoner of war in WW1. After the war ended, he escaped from Russia and made his way to Budapest to rejoin his family. In 1924, he married Erzebat, whose family owned a thriving silk shop. In 1936, Soros’ parents were forced to change their name from German-Jewish Schwartz to Soros, as a way to protect themselves.

After the WWII ended, Soros left Budapest for England in 1947. He attended the London School of Economics to study philosophy. He worked part-time as a waiter and as a railway porter to support his studies.

He was a student of Karl Popper, and Popper’s book ‘The Open Society and Its Enemies‘ informed Soros’ early ideology. Popper in his book critiques totalitarianism claiming that no doctrine owns the truth. And the only way a society can genuinely flourish is if they operate freely and openly while maintaining respect for individual rights. This deeply resonated with Soros and has dramatically influenced him throughout his life.

George Soros graduated with a Bachelor of Science in Philosophy in 1951 and after that enrolled for graduate studies. He eventually graduated in 1954 with a master’s in Philosophy.

George Soros entered the business world working as a clerk at the merchant bank, Singer & Freidman in England. On September 1956, he immigrated to New York, United States and took a job at F.M Meyer, a Wall Street Brokerage firm.

He worked for a few more firms before finally setting up his hedge fund, Double Eagle in 1969. He used $4 million of investor capital and $250,000 of his own money. He set up his second hedge fund, Soros Fund management, in 1970 using the profits he made from Double Eagle as seed money.

Double Eagle was later renamed Quantum Fund, and at its founding, it had $12million in assets under management. With Soros at the helm, the fund found massive success. As of 2011, it had reached $25 billion. The fund continued to flourish, and as of September 2015, Soros had an estimated net worth of $26 billion. He was named as the 21st richest person in the world.

George Soros began his philanthropic works in 1979 by giving black South Africans under Apartheid scholarships, and in 1984 he established the Open Society Foundations. The Foundations comprise of partners with a presence in over 100 countries. The Open Society Foundations, as the name suggests, champion Karl Popper’s stand on open society. It funds numerous global initiatives geared to advance education, justice, business development, independent media, and public health.

Soros, an advocate of a free society, provided photocopiers to reprint banned texts in the Communist Eastern Bloc. After the fall of the Berlin Wall, he established the Central European University to provide a safe space to foster critical thinking. He also invested millions of dollars in the former Soviet-bloc countries to promote liberal democracy and civil society. Although the region was coming out of a period of tyranny, it did not deter him.

After the Cold War, George Soros expanded his philanthropic efforts to Asia, Africa, and the United States. He gave billions to causes to create a more democratic, accountable and transparent societies. He helped finance America’s medical marijuana movement and has been very critical of the United States’ ‘war on drugs.’  According to him, the war is more harmful than the drug problem itself.

Over the years, Soros has helped in disaster relief, established after-school programs, funded arts and cultural studies in schools and colleges. He has also assisted in efforts to integrate Roma into the European Union and provided financial aid to the Russian university system.

George Soros is a big supporter of American liberal and progressive causes. Some of the notable organizations he funds include Planned Parenthood, Apollo Alliance, ACORN and Southern Poverty Law Center. He also funds The National Organization for Women, Sojourners, and Center for American Progress. Soros also supports Media Matters, a progressive media watchdog, and the Huffington Post.

George Soros has had his fair share of controversies in business and his philanthropic works. He is known as ‘The Man Who Broke The Bank of England’ due to his short sale of 10 billion U.S dollars worth of Pound sterling. The deal initiated 1992, Black Wednesday British financial crisis. This led to the devaluation of the currency while Soros made a $1 billion profit.

During the 1997 Asian financial crisis, the Malaysian Prime Minister, Mahathir Bin Mohamad, accused Soros of causing the crisis. Mahathir, who had a history of anti-Semitic remarks said that Soros used his wealth to punish the Association of Southeast Asian Nations (ASEAN) for welcoming Myanmar as a member nation. However, six years later, the Prime Minister accepted that Soros did not cause the crisis.

In 1988, George Soros was approached by a French investor who wanted him to assemble a group of investors. The aim was to buy a large number of shares in the French bank, Société Générale. Soros did not participate in the group’s activities and instead decided to accumulate shares in four French companies including Société Générale, on his own. The French Stock Regulatory Commission investigated Soros for insider trading following his actions at Société Générale but found him innocent. However, 14 years later, the case was reopened, and the French Supreme Court found him guilty and fined him €940,000.

In January 2018, at the World Economic Forum, Soros called for stricter regulations of tech giants, Google and Facebook. He said this would preserve innovation, competition, and fair and open universal access.

During the April 2018 Hungarian elections, Victor Orban, Hungary’s Prime Minister attacked George Soros in his campaign rallies. He accused him of conspiring to flood Hungary with Muslim immigrants to undermine its Christian Heritage. As a result, Open Society Foundations in Budapest announced it was closing down due to safety concerns.

George Soros married his first wife Annaliese Witschak in 1960. They had three children, Robert Daniel Soros, Andrea Soros Colombel and Jonathan Tivadar Soros, before their divorce in 1983. He remarried in 1983 to Susan Weber and had two children, Alexander Soros, and Gregory James Soros, before divorcing in 2005. He married his current wife, Tamiko Bolton, 42 years his junior, in 2013. All his children have followed in his footsteps both in business and in the realm of philanthropy.