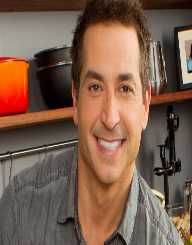 Bobby Deen was born on April 28, 1970, in Albany, Georgia, USA. His mother is the famous cooking television personality, Paula Deen. His father's name is Jimmy Deen.  His brother is also a chef, named Jamie Deen.

In 2006, Bobby Deen and his brother, Jamie, earned their cooking show, called Road Tasted, which aired on the Food Network. Both brothers hosted the show. In the show, they took a road trip around the United States, looking for the best restaurants, trying foods as they visited. The brothers did not stay on the show for long, as they wanted to focus on their restaurant. The brothers were then replaced by Pat and Gina Neely. The show didn’t last much longer, going off the air in 2007.

In 2012, Bobby Deen got his cooking show called Not My Mama’s Meals. This name helped him both show that he didn’t only know what his mother knew, but it also kept him close to her, as she was already a famous chef, which helped to boost his reputation. Paula Deen is known for serving up delicious, but often unhealthy, meals.

On Not My Mama’s Meals, Bobby Deen takes inspiration from his mother’s already wonderful dishes, but he tries to rework them to make the meals healthier, for those who want to have some great meals, but who also want to keep their caloric intake low. On the show, clips of Paula’s show are also shown to show the differences between the recipes. The caloric differences are also often listed. Sadly, the show wasn’t a big hit and only ran until 2013.

In 2015, Bobby Deen and Jamie got back together to make another television show: Southern Fried Road Trip. This show was much like Road Tasted, also premiering on the Food Network. The brothers toured the southern United States, eating at southern restaurants along the way. The show did not last long, not making it past the first season.

When not working on his shows, or his family’s shows, Bobby Deen spends time hosting cooking competitions, mostly on the Food Network. Some of the shows he has hosted are the Holiday Baking Championship and the Spring Baking Championship.

As a young adult, Bobby Dean was already working with his brother and mother opened a catering service in 1989, delivering bagged lunches to various businesses. The business was simply called The Bag Lady. Over time, the business expanded, becoming a restaurant in a Best Western Hotel. Then, the name changed to The Lady, in 1991. Still, the Deen family wanted to expand more. After many years of saving up money, the family was finally able to open a full-sized restaurant in Savannah, Georgia, in 1996. The restaurant was then renamed again, now called Lady & Sons.

Shortly after the new restaurant opened, Paula Deen published cookbooks, which made the restaurant even more popular. Through the late 1990’s and 2000’s, the restaurant won numerous awards. In 2002, Paula Deen got her show on the Food Network, and the restaurant's popularity grew even more. Business was booming. The restaurant moved but within Savannah. It can now hold 300 diners at a time. It is so popular that reservations must be made far in advance. As of 2017, the restaurant is still doing wonderfully under the Deen family’s management.

Bobby Deen has published several books, most of which being cookbooks. Some of his most famous books are listed below.

In 2013, Bobby Deen married his longtime girlfriend, Claudia Lovera. Currently, the couple is still married but has no children.