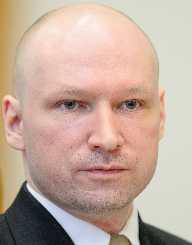 Anders Behring Breivik is a Norwegian national who murdered 77 people. He committed the most heinous mass murders on Norwegian soil since WW2.

Anders Behring Breivik was born in London, England on February 13, 1979. His father Jen Breivik was a Norwegian diplomat stationed in London, while his mother worked as a nurse. Following his parents’ divorce, Breivik relocated back to Oslo Norway in 1980.

He grew up in the wealthy West End region of Oslo. He regularly communicated with his father until he was 15 years. During these years, Breivik visited his father stationed at the Norwegian Embassy in Paris. He later severed links with his father after an unknown misunderstanding.

Anders Behring Breivik started his education at the Smestad Grammar School. He transited to Ris Junior High school. He graduated to Hartvig Nissen High School. He then studied at the Oslo Commerce School from 1995 to 1998. After graduating from school, he enrolled for distance learning of business management studies. He did some sales jobs and sold forged university credentials for a while.

Breivik had few friends. He struggled with finding an identity. He particularly admired his Pakistani friend Ahmed for his toughness. Breivik coped well with people of all walks of life. Her was however easily irritated by the Asian and Semitic communities in Oslo. He broke ranks with Ahmed after being ridiculed continuously by other Pakistani boys. Breivik generated the Islam phobia notion in his heart.

Anders Behring Breivik started planning his attacks in 2009. He went to the Czech Republic to purchase stockpiles of ammunition. He returned without getting any arms. In mid-2011, he started farming in Rena. Using the farming fertilizer, Breivik made the explosives he needed for the attacks. He mirrored his explosive to the Oklahoma attacks in the US.

On July 22, 2011, a car bomb exploded in central Oslo. The car was parked near the official office of the Norwegian Prime Minister. Eight people succumbed to the explosion, while scores of others were maimed. Rescue operations commenced as the police opened their investigations.

As the Norwegian reeled from the Oslo explosion, Anders Behring Breivik dressed up as a policeman and went to Utoya. He joined the teen summer camp held by a local political party. He opened fire on the participants. He was arrested by the authorities in Utoya.

In the custody of police, he admitted to exploding the car bomb in Oslo. He narrated how he e-mailed his motive to people within Oslo. In the journal titled 2083-A European Declaration of Independence, he detailed the threat of multiculturalism and the socialism ideologies. He believed Muslims and the Labor Party posed a grave danger to the Norwegian society. Breivik presented himself as the redeemer of the Christian faith from the two threats. He envisaged the separation of Europe from the Muslims as the only way to keep Christianity from attacks.

As the commander of the vague Christian terror network, he believed that violent annihilation of the Marxists and the European collaborators with Islam as the solution.

Upon investigations, the police discovered Anders Behring Breivik was an active member of various anti-Muslim websites. Breivik rescinded on his earlier admission of guilt while in custody. He pleaded not guilty to the charges in court on July 25, 2011. In his court admission, he testified that he was a member of a Christian terror network. He confessed to fighting the Eurabia conspiracy. Eurabia was a conspiracy to bond Europe and Arabia through the spread of Islam in Christian Europe. In Norway and most Scandinavian countries, most people still hold to this belief.

In August 2012 Breivik was sentenced to the maximum sentence in Norway, 21 years. He is eligible for release after the term. Due to his demeanor, Breivik will likely be denied freedom until he is deemed not a threat. The Norwegian constitution allows the authorities to deny convicts their liberty if they still pose a danger to society.

Anders Behring Breivik has a stand on various issues. On religion, he believes that Europe should be free of any Muslim influence. He admires the early European leaders like Tsar Nikolas 1 of Russia and others, for stopping the spread of Islam into Europe.

On politics, he supports the far right neo-Nazi groups in Europe. Breivik maintains Europe is for the Caucasians only. On anti-Semitism, Breivik believes that Israel is right for the deportation of ungrateful and disloyal Jews back to the Middle East.

Anders Behring Breivik formulated his idea of fighting Eurabia with unmatched passion. He executed his attacks with precision. He shocked entire Norway by his killings.