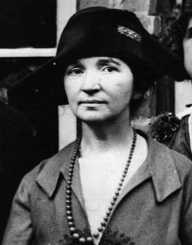 Elizabeth Blackwell was the first woman to graduate from medical school, receive a medical degree in the United States, registered in the UK Medical Register. She was a teacher and author, a social and moral reformer on both countries.

Elizabeth Blackwell was born on 3rd of February 1821 in Bristol, England. She is the third child of nine children, living in a wealthy family. Her father Samuel Blackwell owned a sugar refinery. When Elizabeth was twelve years old, the family moved from England to New York, United States in 1832. When the economy faltered in 1837, they moved to Cincinnati, Ohio for a new start. Three weeks later, Samuel Blackwell died from biliary fever caused by a tick bite.

When Elizabeth was eighteen, she and her two older sisters opened The Cincinnati English and French Academy for Young Ladies. The school was their primary source of income until the boys inherited the business two years later in 1842. After the school closed, Elizabeth worked as a private tutor in Henderson, Kentucky. She resigned within the year due to racist attitudes of parents who were paying her wage.

In her early twenties, her friend Mary Donaldson, was dying of cancer. She told Elizabeth Blackwell that being examined and treated by a male doctor was difficult, and encouraged her to become a female physician. At first, Elizabeth was appalled. But in her biographies, it was her friend’s plight and her determination to avoid marriage, had lead to her making the decision to become a doctor.

Through her sister Anna, Elizabeth worked as a teacher at an academy in Asheville, North Carolina. She lodged with Reverend John Dickson, who was a doctor and a clergyman. He allowed her to use his medical books to study. Elizabeth also started a slave Sunday school, but that venture failed. After that, she moved to Reverend Dickson’s brother’s place.

Samuel Henry Dickson was a doctor; he became her guide when Elizabeth taught in a girl’s school in Charleston, South Carolina in 1846. In 1847, she moved to Philadelphia to apply for medical schools after accumulating the $3000 needed for education and expenses. The big four medical schools rejected her.

Elizabeth Blackwell boarded with Dr. William Elder and studied anatomy privately with Dr. Jonathan M. Allen. Dr. Joseph Warrington allowed her to visit his patients, attend his lectures and use his library. All three were sympathetic to her quest to become a doctor. Most physicians advised her to study in Paris under the guise of a man, but she continued her journey to study in United States. She was rejected by all twenty nine schools in Philadelphia and New York City.

Eventually, Elizabeth was accepted into Geneva Medical College (now Hobart College). It was rumored that the students allowed her in because they thought it was a joke. Other sources quoted  “to every branch of scientific education the door should be open equally to all; that the application of Elizabeth Blackwell to become a member of our class meets our entire approbation; and in extending our unanimous invitation we pledge ourselves that no conduct of ours shall cause her to regret her attendance at this institution.”.

Initially, Elizabeth Blackwell was barred from attending classroom demonstrations, but she won them over by hard work and quiet personality. Between school terms, Elizabeth would visit Philadelphia to work at the Blockley Almshouse. There, she gained the clinical experiences. The typhoid outbreak had provided her with a subject for her thesis in Geneva.

Elizabeth Blackwell graduated top of her class in January 1849. It was highly publicized in United States and Britain. Although she had the training and credential, she was barred from being a doctor by the community. Elizabeth met the same resistance in Europe, She then entered La Maternité Hospital, Paris, where she was admitted as a student midwife, not as a physician. A young resident physician provided her training in obstetrics but her study was cut short when she contracted purulent ophthalmia. The result left her blind in one eye, ending her dream of becoming a surgeon.

After Paris, Elizabeth Blackwell enrolled at St Bartholomew's Hospital in London in 1850, becoming an intern through the help of a cousin. She regularly attended James Paget's lectures. She returned to New York City in 1851 to start her own practice. Her sister Emily Blackwell would graduate later to join her. Her clinic had little patients due to the stigma that women doctors were abortionists.

When Elizabeth started giving lectures about preparing for motherhood and published The Laws of Life with Special Reference to the Physical Education of Girls, she was accepted as a female doctor in 1852.

In 1853, Elizabeth Blackwell started a small dispensary near Tompkins Square. She accepted Marie Zakrzewska, serving as her preceptor in her pre-medical studies. In 1857, Dr. Marie Zakrzewska, Emily and Elizabeth Blackwell expanded into the New York Infirmary for Indigent Women and Children. The institution accepted both in and outpatients, and served as a nurse's training facility.

In 1858, under a clause in the Medical Act that recognised doctors with foreign degrees practicing in Britain before 1858, Elizabeth Blackwell became the first woman to have her name entered on the General Medical Council's medical register. She also became a mentor for Elizabeth Garrett Anderson when she set up private practice and served as a lecturer at the London School of Medicine for Women.

When the American Civil War broke out in 1861, the clinic offered aid. Elizabeth Blackwell helped establish the U.S. Sanitary Commission under the auspices of President Abraham Lincoln, but had resistance on the part of the male-dominated Commission. The New York Infirmary managed to work with Dorothea Dix to train nurses for the Union effort.

After the war in 1869,  Dr. Elizabeth Blackwell set up practice in London and continued her efforts help women study medicine. She helped form the National Health Society of England in 1871. In 1874, she founded New Hospital and London School of Medicine for Women with Sophia Jex-Blake. She was the professor of gynaecology in the school from 1875 to 1877, she retired when her health started to fail.

In 1879, Elizabeth Blackwell moved to Hastings and began writing on issues she felt needed reform. She published made medical education issues such as ethics, preventative medicine, sanitation, etc. Her autobiography “Pioneer Work in Opening the Medical Profession to Woman” was published in 1895, when she was 74. She wrote four other books and many medicine-related articles.

In 1856, Elizabeth adopted Katherine "Kitty" Barry, an Irish orphan from the House of Refuge on Randall's Island. She fostered Barry out of loneliness and a need for domestic help, Elizabeth provided Kitty with an education, but never encouraged her to seek her interest. As she was not married, Kitty became her half daughter, half helper.

In 1907, Elizabeth fell off the stairs in Kilmun, Scotland, nearly disabling her physically and mentally. Elizabeth Blackwell died at her home in Hastings, Sussex in 1910, due to stroke. Her ashes were buried in the graveyard of St Munn's Parish Church, Kilmun. The Lancet and The British Medical Journal published obituaries honoring her.