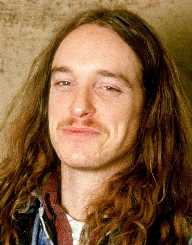 Cliff Burton was an American musician and a member of the rock band Metallica. Burton was born on 10 February 1962 in Castro Valley, California. He was the youngest child of Jan and Ray Burton; he had an older brother, Scott and a sister, Connie. Father Ray was initially from Tennessee and worked as an assistant highway engineer. Burton’s mother was a teacher from California and worked with disabled children. Scott Burton died of a brain aneurysm at age 16.

As a young child, Burton displayed a keen interest in music, and he started playing the bass guitar when he was thirteen. He also showed an interest in classical music, notably Bach.

Steve Doherty was his bass teacher from September 1978 until January 1980. He described Burton as a severe and quiet student who was always well prepared for his lesson.

After the early death of his elder brother Scott at thirteen, Burton promised his parents that he was going to be the best bassist for his brother. His mother said in an interview that he got into the habit of practicing the bass up to six hours a day.

Music was his passion. He was a fan of R.E.M., Police, Yes and Peter Gabriel. He also enjoyed classical music.

Cliff Burton’s first band was EZ-Street with Jim Martin and Mike Bordin. In 1979, the group entered a local Battle of the Bands contest and came fourth. One of their songs was Rabel Rabel (David Bowie).

Later the three musicians would play together in Faith No More. After graduation, Burton joined the favorite LA band, Trauma. It was while playing at a gig with Trauma that Burton was noticed by James Hetfield and Lars Ulrich. They subsequently asked him to join Metallica to replace Ron McGovney. Burton had one stipulation about joining Metallica. He asked that they relocate to the San Francisco area, and this was done.

Metallica’s fans reacted favorably to Cliff Burton’s bass playing, and his sound soon became part of what fans expected from Metallica both at their shows and on their albums. He appeared on Kill Them All, Ride the Lightning and Master of Puppets. He said in an interview that is favorite song was Master, which he considered the best song Metallica had recorded.

Cliff Burton was known to love his Rickenbacker guitar. He had used it since 1982. In 1984, he was given an Aria Pro II bass guitar.

The band had just signed with a major label and was in the process of releasing their breakthrough album when Cliff Burton died. Metallica was touring in Sweden. In the early hours of the 27 September 1886, while traveling between Stockholm and Copenhagen, the tour bus slid off the road. Burton had been asleep on a bunk; he was thrown from the bus and killed. A court would later find that no-one was at fault. Jason Newsted replaced Burton as bassist with Metallica.

There is a memorial to Cliff Burton in Ljungby, Sweden at the site of the bus crash. There is a plaque for Cliff Burton as well as his brother Scott, at Marshall Elementary School in Castro Valley.