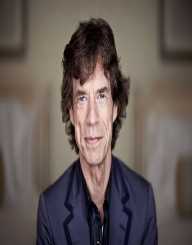 Mick Jagger was born on July 26th, 1943. His birthplace was in Dartford, England. Throughout his music career, Jagger has earned the recognition of being one of the most influential rock and roll artists of the time. He has been in the limelight entertaining music fans for over four decades. Being a music idol, he was one of the founders of the Rolling Stones. His music prowess not only inspired many rock and roll enthusiasts, but it also took his band to the top of their careers. Some of the major hits that they released "(I Can't Get No) Satisfaction," "Miss You," and “Angie.”

Sir Michael Philip "Mick" Jagger was born in England in 1943. His parents were Eva Ensley Mary and Basil Fanshawe Jagger. He is the eldest brother of Chris who was later born in 1947. The music talent runs in the family as Chris is also a musician. In fact, the two have performed together.

During Jagger’s early stages in his education, he was an obedient student and was one of the people’s favorites. Due to his early interest in music, while still young, Jagger had his first guitar when he was only 14 years old. His particular genre of music that he loved was R&B music and American Blues. While in his teens, he began making his record collection by selecting the best blues from renowned artists who inspired him including Howlin' Wolf and Muddy Waters.

Jagger later enrolled at London School of Business where he studied for his business degree. During this period, Jagger had in mind that he would pursue journalism or enter into politics after graduating.

Young Jagger pursued his college education while at the same time working on ensuring that his band progressed. Sooner or later, there was a new member, Keith Richards who became the guitarist. Jagger and Richards had been friends all along as they spent time together in Dartford.

With time, Jagger and Richards met with another guitarist, Brian Jones. They recruited him into the band due to his unique skills on the guitar. During the early days of the group, they performed for no payment Alexis Korner’s gigs. Soon, they paired with Jones who had the intention of coming up with his band. Ian Stewart was also among the group that would later form the Rolling Stones. Soon, the group was joined by Charlie Watts, a drummer. Shortly after this, Dick Taylor left, but it did not take time before they found his replacement, Bill Wyman.

Their new manager for the group was Andrew Loog Oldham, and he brought a sense of direction into the band. Sooner or later, Rolling Stones gained the recognition of being a wild group. Through this new identity, they managed to land themselves signing with Decca Records. Jagger became an influential figure towards the success of their new band.
The band majorly focused on recording cover versions of songs that they did not write. With time, they pulled their creativity together and began writing their songs. One of the cover versions that earned them recognition was "It's All Over Now" by Bobby Womack. In 1964, their debut album was out. The next thing was to tour the U.S as they had hit songs such as "That Girl Belongs to Yesterday."

Time passed, and more hits were released with the likes of "(I Can't Get No) Satisfaction." This was their first global hit as a band. They had their distinct image out there as troublemakers. Their rivals the Beatles were regarded as different from them since they were a “lovable moptop.”

In 1967, Jagger hit the headlines for the wrong reasons. Police had raided Richards’s home, and the artist was found to be in possession of drugs and other illegal substances. Jagger was with the company of his girlfriend, Marianne Faithfull when the arrest was made. Richards was also among those that were arrested during the raid. The individuals were lucky enough as their charges were dropped later on. However, two years down the line, Jagger and his girlfriend have arrested yet again for drug possession.

Regardless of the controversies that surrounded Jagger and Richards, the band was enjoying success with hit songs and albums. In 1968, for example, they released Beggars Banquet. This album was promoted by one of its hit singles, "Jumpin' Jack Flash." The song topped the U.K charts and was ranked as top five in the U.S.

In the mid-60s, Jagger had started branching out and featured in some films. In 1966, he appeared in Charlie Is My Darling together with the other members of the band. This was a documentary film featuring the Rolling Stones. In 1970’s he appeared in Gimme Shelter, Ned Kelly, and Performance. A decade later, he featured in other movies with the likes of Burden of Dreams- 1982 and Running Out of Luck- 1987.

In 1971, Mick Jagger wedded his first wife, Bianca de Macias. The two separated after seven years. His second marriage was to Jerry Hall who spent nine years with Jagger before their marriage was considered invalid. They had four children together. Jagger has fathered several children in some relationships that he has been involved in.