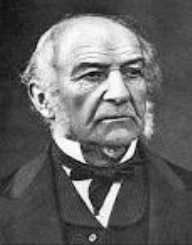 William Ewert Gladstone was born 29th December 1809 in Liverpool, England. He came from a wealthy family, and he had four brothers. His father was a merchant, and so was his grandfather. In 1846, his father became a baronet.

Gladstone started his schooling in 1816 at the vicarage of St. Thomas' Church in Seaforth. He attended the school until 1821.

In 1821, he enrolled at Eton College, and in 1828, he graduated from Christ Church, Oxford. He studied Mathematics and the Classics.

After graduation, Gladstone traveled to Europe with one of his brothers.

In 1833, William Ewert Gladstone wanted to become a barrister, but he changed his mind in 1839 and moved into politics.

The Duke of Newcastle granted Gladstone a seat in Newark, which he won at the election.

In 1834, the Party appointed Gladstone as Junior Lord of the Treasury. He then became Under-Secretary of State for War and the Colonies. He held the position for five months until the government resigned.

From 1841 to 1846, William Ewert Gladstone served as a minister in the Robert Peel government. He was the President of the Board of Trade.

Gladstone was instrumental in the Railways Act 1844. Historians recognize this period as one where regulations were introduced and managed. These included the rate of return regulation, the telegraph regulation, and the network industry regulation. He guided the Act through parliament successfully.

In 1845 he resigned over a matter of conscience between the government and the church.

William Ewert Gladstone returned to the government in December that same year, as Colonial Secretary. No seats were available, so due to this, he became Secretary of State without a seat in parliament.

From 1845 to 1851, Gladstone was in opposition. Peel died in 1850, and as a result, Gladstone became the leader of Peel's group in the House of Commons.

During this time, in 1849, Gladstone worked with prostitutes to find them gainful employment.

In 1852, William Ewert Gladstone became Chancellor of the Exchequer. He served until 1855, working to reduce duties and customs. From 1855 to 1859, he was back in opposition again.

Gladstone's second term as Chancellor of the Exchequer began in 1859, and it finished in 1866. He served under the government of Lord Palmerston. After inheriting a huge deficit, he worked to bring it under control and to get the finances back in order.

Leader of the Liberal Party

William Ewert Gladstone became the leader of the Liberal Party in 1867. In 1868, he won the election to become the Prime Minister, and he served in the role until 1874.

His government introduced massive reform in the Army, local government, and the civil service. He introduced the Licensing Act 1872, the Irish Land Act, and Forster's Education Act. He also restructured the court system.

During his second term, William Ewert Gladstone went to war with Egypt. He won the battle and took control of Egypt for four years.

Gladstone won the election of 1886, but the Home Rule Bill split the Party. As a result, the Bill was thrown out of parliament. Gladstone's parliament finished just several months after gaining office.

From 1886 to 1892, Gladstone sat in opposition. Gladstone supported the strike held by the London dockers in 1889. He won his fourth Prime Minister role in 1892 and served for two years.

During this period, William Ewert Gladstone introduced the Elementary Education (Blind and Deaf Children) Act in 1893. The Act provided blind and deaf children with their education.

Gladstone resigned from the Prime Minister's role in March 1894.

In 1895, William Ewert Gladstone donated a substantial sum of money along with his 32,000-volume library. The donations were to found St. Deiniol's Library in Wales.