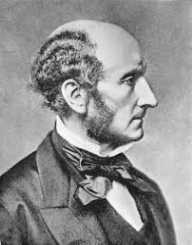 John Stuart Mill was born on May 20, 1806, in Pentonville, London, England. His father James Mill was a Scottish philosopher, historian, and economist. John was the eldest child of his parents James and Harriet. Mill was educated by his father, with the assistance of philosopher and jurist Jeremy Bentham and social reformer Francis Place. Mill’s father deliberately shielded his son from being associated with children his age, except his siblings. He aimed to create a genius intellect to carry the cause of utilitarianism.

John Stuart Mill had learned Greek by the time he was three years old. As a child, he read Aesop’s Fables, the whole Herodotus and works of Plato. He was also taught English history, arithmetic, physics, and astronomy. When he was eight years old, Mill began to study Latin and algebra and began to work as a schoolmaster to his younger siblings. His father also emphasized the importance of studying and composing poetry.

Around the time John Stuart Mill was 12 years old, he began studying scholastic logic and reading Aristotle’s logical treatises. He also began studying political economy. Mill and his father completed their classic view on the economy of factors and production, and he helped his father to write the Elements of Political Economy.

When John Stuart Mill was 14 years old, he went to France to visit Samuel Bentham. During his time in France, Mill developed a love for the mountain landscapes and was deeply impressed by way of the French living. He attended courses on chemistry, zoology, and logic at the Faculty of Sciences in Montpellier.

When John Stuart Mill was 20 years old, he experienced several months of sadness and depression and thought about suicide. He lost his beliefs in the creation of a just society and stopped striving towards this objective. He came out of this period of his life by studying the poetry of William Wordsworth, which showed him that beauty generates compassion and stimulates joy. This thought became one of the main differences between him and his father. Around this time, Mill also began to correspond with Auguste Comte, who was the founder of positivism movement.

John Stuart Mill was a nonconformist and refused to subscribe to the Thirty-Nine Articles of the Church of England, making him non-eligible to study at Oxford or Cambridge. Instead, he attended the University College, London and went to work for the East India Company. He worked as a colonial administrator from 1823 until 1858, when the company was abolished. In 1836, he began working at the Company’s Political Department, where he was responsible for correspondence with the princely states. This time in Mill’s life was a major influence on him and in his work On Liberty, A Few Words on Non-Intervention, he defended British imperialism.

In Mill’s opinion, countries such as India and China was once progressive but had become stagnant and barbarous. He legitimized the British rule since it provided the barbarians with improvement. To defend the Company rule, Mill wrote the Memorandum on the Improvements in the Administration of India during the Last Thirty Years and other petitions.

In 1856, John Stuart Mill was elected as the Foreign Honorary Member of the American Academy of Arts and Sciences. In 1865, he began serving as the Lord Rector at the University of St. Andrews, where he worked until 1868. At the same time, he was also serving as the Member of Parliament for the City of Westminster. As MP, he advocated easing the burdens on Ireland. In 1866, he became the first person in the history of British Parliament, to call for the right to vote to be given to women. He was also an advocate of many social reforms, such as labor unions and farm cooperatives. In 1868, he debated for the retention of capital punishment for crimes, such as aggravated murder.

John Stuart Mill was seeing Harriet Taylor for 21 years until the couple finally married in 1851. At the time of their first meet, she was married. It is believed that Taylor and Mill did not engage in a sexual relationship until the death of her first husband. Taylor was a major influence on Mill’s work and reinforced his advocacy for women’s rights. Taylor died in 1858 from lung congestion. John Stuart Mill died in 1873 of skin infection.