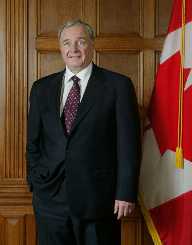 John Turner was born on June 7, 1929, in Richmond, London, England. His parents were Phyllis Gregory and Leonard Turner. Sadly, Turner’s father died while he was still young. After this tragic event, Turner and his mother moved to Canada, where they spent the rest of their lives. While in Canada, Turner’s mother remarried to a man named Frank Ross, who would serve in helping to raise Turner as his step-father.

In 1954, John Turner took his bar exam and passed.

After passing his bar exam, John Turner went on to work at Stikeman and Elliot, a law firm in Montreal, Canada. He worked there for several years before he began getting involved in politics. It as in 1957 that Turner officially began getting involved with politics. He first started working with the Liberal party. He did some smaller things with this party for several years, but it wasn’t until 1962 that he ran in his first election for an office in the House of Commons. He won the election and took on the post shortly afterward.

He took on his next political position in 1965. John Turner was made a cabinet member. He was made the Minister of Consumer and Corporate Affairs two years later. He ran in another election near the end of this decade, but he lost. A few years later, in 1972, Turner was appointed to the position of minister of Finance under Trudeau. He worked in this position until 1975. He resigned from the post mostly because he was facing difficulties because of a difference of opinions in many matters with Trudeau. One year later, he also resigned from Parliament. From 1976 until 1983, Turner stayed out of politics and focused on his law career.

In 1984, John Turner got back into politics and ran in an election to become the head of the Liberal Party. He also became the Prime Minister in this year. He succeeded Jean Chretien. However, he was not elected to this position. He did not officially run for the post until later on in 1984. He won the election, but only stayed in the post until 1989. He did not last for as long as some other heads of the party because he was not highly decisive. Much of what he did was to make himself seem different from Trudeau.

Even though he was no longer head of the Liberal Party, John Turner stayed involved with politics. He continued to work in the House of Commons until 1993. After 1993, Turner went back to working on his law career instead of on his political career.

All of Turner’s awards and accomplishments are due to his efforts in politics.

John Turner is married to Geills Turner. The two were married in 1963. This couple has four children together. As of 2017, this couple is still married.