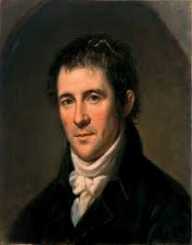 Benjamin Latrobe was a British-American architect who became famous for the construction and design of the United States Capitol in Washington D.C.  Aside from that, he also worked on numerous projects for the United States government, as well as in private practice. He died at the age of 56 on September 3, 1820, in New Orleans, Louisiana upon contracting yellow fever.

Benjamin Latrobe was married for the first time in January 1790 to Lydia Sellon. Upon marriage, the couple settled in London and brought forth children; Lydia and Henry SellonBoneval Latrobe but died upon childbirth in November 1793. His second marriage was in 1800 to Mary Elizabeth Hazlehurst when he settled in Philadelphia.

Born on May 1, 1764, as Benjamin Henry Boneval Latrobe, he was a native of the Fulneck Moravian Settlement located in the city of Leeds, in West Riding of Yorkshire, England. His parents were Anna Margaretta Antes and Benjamin Latrobe; he also has a brother named Christian Ignatius Latrobe who later came to be known as a musical composer and a Moravian leader.

His father was a well-known Reverend of the Moravian Church who has a lot of connections on the higher class of society and was also the one behind all the Moravian institutions in Britain. His mother, on the other hand, was a native of Pennsylvania but immigrated to England on her father’s wishes to attend a Moravian School located in Fulneck.

As a child, his father instilled in him the importance of education, and social interactions while his mother encouraged him to keep his curious mind and also introduced to him the wonders of the land of America. He attended a Moravian School at Niesky, situated in Upper Lusatia which was in between the borders of Prussia and Saxony when he was 12 years old.

At 18, Benjamin Latrobe traveled and went on a trip all around Germany then signed up as a member of the Royal Prussian Army. While in the army, he may have contracted an illness which led to his release from service. Upon release, he traveled extensively the lands of Paris, Italy, as well as the Eastern part of Saxony of which he drew his architectural influences.

While in Germany, Benjamin Latrobe went under the tutelage of Baron Karl von Schachmann. Schachmann was a scholar who had a deep interest in the arts, as well as collecting them. He pursued being an architect after being exposed to Schuchmann's work.

At the same time, a new architectural movement was emerging in England, which mainly composed of the return of Vitruvian and Classical designs. He was deeply attracted to the Greek Revival style and the Neoclassical style which he later adapted on his designs and implemented on his projects.

Benjamin Latrobe was known for several works both in England and in the United States. His first project under his practice was the design of the Hammerwood Lodge in 1792 located in East Grinstead, Sussex. Before that, he worked under the supervision of a local engineer, John Smeaton, who was responsible for the design of the Eddystone Lighthouse.

He worked alongside Smeaton once again for the construction of the Basingstoke Canal in Surrey in 1793, joined by another engineer named William Jessop.

Benjamin Latrobe came to settle in America in 1796 after the death of his first wife and settled in Norfolk, Virginia. In Virginia, he became friends with then-President George Washington’s nephew, Bushrod Washington. Through Bushrod, he was awarded an audience with the president as well as a chance to visit Mount Vernon in 1796.

Known for his work as an architect, he was awarded his first commissioned project in the US in 1797: the State Penitentiary in Richmond. His next known project was when he was relocated in Philadelphia and got acquainted with Samuel J. Fox, then-president of the Bank of Pennsylvania. Fox commissioned him to design for a new bank building.

While en route to Philadelphia, Benjamin Latrobe caught a glimpse of the Capitol building which was still under construction at the time. He got a chance to meet with the building’s architect at the time, William Thornton, but was not at all impressed with the overall design.

Benjamin Latrobe was granted the chance to redesign on 1815 it when construction was resumed after the War of 1812. He presented the design and complete drawings to then-US President James Monroe in 1815.

Another one of his notable work is the Baltimore Basilica. Also known as the Old Baltimore Cathedral, it was commissioned by Bishop John Carroll, the first bishop appointed for the Roman Catholic Diocese of Baltimore. Construction of the building started in 1806 and was opened in 1821, despite not being finished. This building was also the first Roman Catholic Cathedral that survived well into the 20th century in the United States.

Aside from the cathedral, Benjamin Latrobe was also responsible for the Baltimore Exchange from 1816 until the early 1820s which was also named as the largest domed building in the United States at the time.