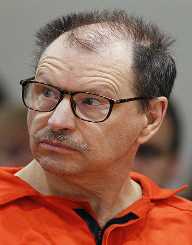 American serial killer who became known as The Green River Killer was born Gary Leon Ridgway on the 18 February 1949 in Salt Lake City, Utah. He was the second son of Thomas and Mary Ridgway and had two brothers, Greg and Ed. Ridgeway was raised in SeaTac, Washington.

Gary Ridgway was a student at Tyee High School, SeaTac, Washington (1969) and after graduating, he joined the U.S. Navy and was sent to Vietnam.

Ridgway first came to the attention of police when, aged 16, he led a young child of six into the wood and stabbed him. The child survived the attack. After returning from Vietnam, he moved to Seattle where he worked as a painter. He was arrested on charges relating to prostitution in the early 1980s and again in 2001.

In 1983, police began to suspect Gary Ridgway of being involved in the Green River killings. He passed a lie-detector test, although later technology showed that he had failed the test. Police also took saliva samples and hair of Ridgway’s saliva and hair in 1987. With improved DNA analysis, when these samples were re-analysed in 2001, it led to Ridgway’s arrest on the 30 November 2001. He was initially charged with the murder of four women in the 1980s.

Further investigation and forensic analysis led to his involvement in multiple killings. On the 5 November 2003, Ridgway pleaded guilty to 48 charges of first-degree murder. He offered to give detailed information about the killings in return for avoiding execution. Ridgway received 48 consecutive life sentences with no parole. He claimed in 2013 that he had murdered over 70 women.