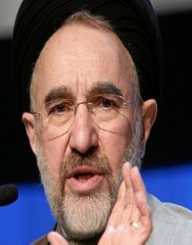 Mohammad Khatami is an Iranian Shia religious scholar turned politician, who later became president. He was elected for two terms from 1997 to 2005, on a reformist platform.

Mohammad Khatami birthday is celebrated every 14th of October; he was born in the year 1943, in Ardakan, Iran. His family was deeply religious. His father, Ruhollah Khatami was a senior religious cleric or Ayatollah in Yazd province. His mother’s name was Sakineh Ziyai.

Khatami graduated from high school in 1961. He then enrolled at the Qum Theology School. In accordance with the law in Iran, Khatami served in the military for two years. After his religious studies in Qum and military service, Khatami studied at the Isfahan University. He subsequently graduated with a Bachelor degree in Western Philosophy in 1968. He further enrolled for a Master degree in education at Tehran University. Following in his father’s footsteps, he decided to go back to advance his religious studies in the religious city of Qum. He was to spend about seven years in Qum.

During this time, he became a respected Shia cleric. He was also exposed to the revolutionary teachings of Ruhollah Khomeini. In 1978, the revolutionary movement sent him to represent it in Germany. Khatami returned to Iran after the 1979 Islamic revolution.

Though Mohammad Khatami started his political activities during his student days in Tehran University, Khatami always kept a low profile. He was more inclined to political and religious debates within the student fraternity.

After his return, he became involved with the Islamic Republican Party. The revolution leader, Ruhollah Khomeini appointed him the supervisor of the Keyhan newspaper. In just under one year, his political star rose after he was elected to parliament as a representative of Ardakan constituency. Two years into his term, he was appointed Minister of Culture. This forced him to relinquish his elective post in Ardakan.

In 1986, Mohammad Khatami resigned from the cabinet. This was after the progressive administration of then Prime Minister Mir Hossein Mousavi was subdued by the radical conservatives from within the party. Khatami and other progressive clerics left the party to form the Association of Combatant Clergy.

He was appointed back to the cultural ministry in 1989 by the new president Ali Akbar Hashemi Rafsanjani. With the Hashemi’s blessings, Khatami got a platform to pursue his reformist agenda. His policies enraged his conservative critics again. This led to the second resignation of Khatami from the cabinet. With his exit from the cabinet, he was appointed as Director of the National Library in Tehran and influential adviser of the president.

Despite his constant criticism, Rafsanjani’s pragmatism helped him secure another term in 1993. As expected, Khatami was at the center of Rafsanjani’s reelection campaign. Encouraged by the win, Khatami used this opportunity to advance ideological debates and the reformist agendas within the Iranian society.

Mohammad Khatami was elected to the presidency in 1997, succeeding Rafsanjani. In the run to the elections, He was considered the outsider in the four-way race. Despite not receiving adequate coverage from the state-owned media, he solidly beat favorite candidate, parliamentary speaker Ali Nateq-Nouri. Khatami’s liberal views managed to appeal to the youth, women, progressive intellectuals. His background as a respected Shia scholar also gave him a surprise win in the Qum conservative circles.

In his presidency, Khatami spearheaded social reforms within the society. Despite severe opposition from the conservatives in parliament, he managed to stabilize the economy, elevate the political and social participation of the youth and women in domestic affairs.

Mohammad Khatami also reached out to the international community, something that was relatively alien for Iranian leaders. He emphasized that it was Islamic to dialogue with other cultures, rather than fight them. As a result of this, he became the darling of the west. This dealt a detrimental blow to his administration. Most of his allies were persecuted by the state organs.

In the bid for a second term, Khatami upstaged his opponents again with his liberal offensive. His official term came to an end in 2005, after serving his full second term. He was succeeded by the conservative candidate Mahmoud Ahmadinejad.

Mohammad Khatami got married to Zohreh Sadeghi in 1974 while still studying theology in Qum. The couple has three children.

Mohammad Khatami’s rise to the presidency raised the hope of many in Iran. Many young people and women joined politics and other national platforms in calling for the equitable representation in the society. His style of approach proved that ideological difference in cultures does not mean hostility.

As a scholar, he has published several books in Persian, Arabic and English languages.