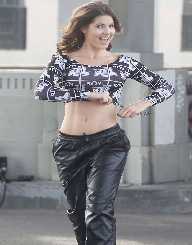 Amanda Cerny is an actress, Youtuber, social media personality, TV personality and fitness model from the United States. Amanda is a multi-talented and multifaceted personality. However, Amanda is widely known as a Vine star and a Youtuber. Amanda's breakthrough to fame was in 2011 when she was part of the list of Playboy playmates. After that, Amanda ventured in modeling and featured on the cover of `Health and wellness’ magazine. Whatever sector she ventured into, Amanda attained success and gained popularity.

Through cameo appearances on TV, acting and posting amusing vines, Amanda Cerny gained the attention of vast audiences who find her hot and beautiful. More so, Cerny is a social media queen with over 4.6 million followers on the vine, 5.6 million on Instagram and about 440 thousand on Twitter. Also, Amanda is widely called the Queen of snap chat.

Amanda Cerny was born on 26th June 1991, in Pennsylvania, United States.Amanda is of the white ethnical background, though very little is known about her parents and their background. Amanda was fond of her sister called Samantha, Cerny was raised in Florida, but the family later relocated to Los Angeles, California.Cerny joined Florida State University for her undergraduate studies.

Amanda Cerny is naturally beautiful with a hot body and striking features that many models or female personalities would only dream off. Although Amanda was gradually gaining fame through her various activities and social media, the real game changer came by in 2011 when Amanda became part of the list for the October issue of the Playboy playmates. At this time, Amanda was at Florida state university. Cerny sent some of her cute bikini modeling pictures to the magazine and received a positive response whereby she was invited to Los Angeles for a photo shootout for the magazine.

Following this, Amanda Cerny immediately began modeling and was very good at it. More so, Amanda turned to social media whereby she launched a YouTube channel and an account on video app, Vine. Amanda posted hilarious and sexy videos on the accounts, and also videos of her workout routines on a regular basis.

Amanda Cerny content attracted a lot of views and fans, and gradually gained millions of followers.  Cerny's ‘most popular videos are called `the proper way to eat a banana,’ which enjoyed more than a million views on YouTube. Over time, Amanda's popularity grew, and she gained more followers on Vine and had become one of the most celebrated personalities on the platform.

Apart from social media, Amanda Cerny has had considerable success in the film and T.V sector.Amanda is part of the cast of famous American comedy T.V series called `Adam Devine’s House Party,’ where her character keeps recurring in subsequent episodes. Also, Cerny featured in the film `The bet’ with the role of Mrs. McDoogle.

More so, Amanda Cerny has made cameo appearances on various productions by HBO, for example, `Hello ladies,’ `Homeless in Heathrow’ and `The late show with James Cordon.’ Amanda has also been associated with campaigning activities involving big movie names for instance; Paramount Pictures and Twentieth-century fox.

Amanda Cerny is known to be very compassionate and always looks out for opportunities to help other people. Hence, Amanda Cerny has been part of many charitable activities, for example, a charitable project in Haiti 2010. More so, Amanda founded a charitable organization named the Play foundation. Cerny also uses her popularity on social media to spread awareness on charity activities. During the Forbes under 30 summit, Amanda came up with an organization named Changur, whose primary objective was to raise funds for needy children.

Amanda Cerny is devoted to fitness and spends a reasonable portion of her time to keep fit and maintain her body shape. One of Amanda's favorite workouts is the Cardio.

Amanda Cerny is always keen on balancing between professional and private life, and few details are known about her private life. However, Cerny is not married or engaged and has a straight sexual orientation. Amanda is believed to have a net worth of around $1 million. Apart from Amanda participated on various social media platforms, Cerny has a personal website, amandacerny.com.