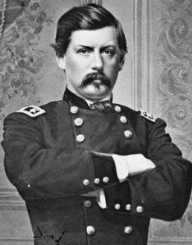 George Brinton McClellan was an American military commander who fought for the union during the civil war. He became a politician and served as New Jersey governor.

George Brinton McClellan was born 3rd December 1826, in Philadelphia. He was the son of a prominent doctor and founder of the Jefferson Medical College. McClellan was one of the five children in the family.

In 1804 he went to the University Of Pennsylvania School Of Law. He dropped out after two years to pursue a career in the military. His father appealed to the US President John Tyler for an exemption. Though underage, he was exempted. In 1842, McClellan was admitted into the US Military Academy in New York. In 1846 he graduated from the military academy second best, in a class of 59 military cadets. He earned the rank of Second Lieutenant of the Army Engineers.

After graduating from the academy, McClellan was immediately deployed to the south. The US was at war with Mexico. He served in the engineering company away from the frontline combat. He was in charge for the construction of the necessary infrastructure to ease the mobility of the combatants. McClellan came under enemy fire once in a while. He also led his unit in reconnaissance missions beyond the enemy lines. After the war, he was promoted to Captain of the Army.

As a young military officer, McClellan discovered the need to have sound military strategies and discipline in minimizing casualties. He also realized the need to maintain the military and political balance while pacifying the enemy. After the war, he went back to the military academy as an instructor. He continued serving in the engineering company, being deployed to undertake major infrastructure projects.

During his service in the railroad industry, McClellan joined politics. He joined the Democratic Party. In the 1860 elections, he endorsed the candidacy of the Democrat presidential candidate Stephen Douglas. Douglas was defeated by Abraham Lincoln.

The American Civil War started in April 1861. McClellan joined the US Army in May 1861. He was deployed to head the army in Ohio and West Virginia. He successfully defended and pacified the Confederate Army. In May 1861 he was assigned to fight along the Virginia frontline while defending the US capital. He became the commander of the US Army in the Department of Ohio. He was in charge of defending six states from enemy reach. He became an Army General on May 14 18614 at the age of 34. In November 1861, Winfield Scott the US Army General in Chief retired. McClellan replaced him as the new General in Chief of the US Army.

As General in Chief, McClellan brought back the discipline and morale the army lacked. He formed a formidable fighting machine and won considerable battles. He, however, failed to annihilate the Confederate armies after defeating them on several occasions. President Lincoln was angered by his constant delays in wiping out the enemy armies. In November 1862, President Lincoln relieved McClellan from the army command. McClellan joined politics.

In the 1864 national elections, McClellan became the Democrats presidential candidate. He chose George Pendleton from Ohio as his running mate. McClellan lost his campaign because of the deep wrangling within the party and considerable gains by the Union army. President Lincoln capitalized on the gains in the war and his abolition of slavery. McClellan lost the support of his running mate George Pendleton. McClellan resigned from the army on the eve of the Election Day. President Lincoln won the elections.

McClellan left for Europe. He returned in 1868 and rejoined politics. He also worked in the railroad industry until 1877. In the 1877 elections, McClellan was elected the Governor of New Jersey. He served for a single term from 1878 to 1881.

McClellan was a military genius. He enlisted into the army at the age of 14. He graduated a Second Lieutenant of the US Army Engineering Corps at the age of 18. He was appointed the General in Chief at 34.

McClellan died on October 29, 1885. His remains were buried at the Riverview Cemetery in New Jersey.