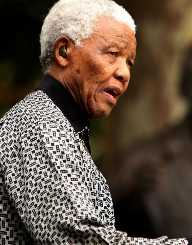 Nelson Rolihlahla Mandela was a South African politician who served as the President of the country from 1994 to 1999. Born on July 18, 1918, he was a strong anti-apartheid revolutionist, activist, and a philanthropist. Mandela became the first black elected president after the dominance of the minority white.

Before his assumption of power, Nelson Mandela took part in several anti-government protests that led to his arrest and subsequent sentence to life imprisonment. However, due to several agitations in and outside the country and the fear of the break of racial war, the then president F.W D. Klerkbow to the pressures and release him in 1990, after serving 27 years in prison. He later became the President of the African National Congress (ANC) from 1991 to 1997.

As President, Mandela tackled issues of racism and reconciliation between the whites and blacks to do away with the deep-rooted apartheid in South Africa. He also dealt with eradicating poverty, healthcare challenges, and initiated land reforms. After serving his first term as president, he declined to contest again. Mandela received several honours and was given the title Madiba “Father of the Nation.”

Nelson Rolihlahla Mandela was born on July 18, 1918, in the village of Mvezo, Umtata which was part of the Cape Province at the time. He was born to Gadla Henry Mphakanyiswa and Nosekena Fanny. His father was a local chief and councillor and was sacked in 1926 on issues of corruption. Mandela started his education at a local Methodist School at age seven. That was when he was given Christian name, Nelson by his teacher.

After his father’s death, when he was just nine years old, his mother took him to the palace of Mqhekezweni (Great Palace) to live under the care of the Thembu regent, Chief Jongintaba Dalindyebo and his wife, Noengland. According to him, even though he never saw his mother for a long time afterwards, he received parental love from his guardians. While there, he continued his education at a Methodist Mission school nearby where he studied history, geography, Xhosa and English.

Though his parents were illiterates, Nelson Mandela was eager to have education as he would someday become a privy councillor for the Thembu royal house, as he was also a royal. He then had his secondary education at the Clarkebury Methodist High School, Engcobo in 1933. The school was the largest in the Thembuland meant for black Africans. He spent two years in school and completed with a Junior Certificate. He then continued at the Methodist College in Fort Beaufort, Healdtown in 1937.

Nelson Mandela practised sports like boxing and long-distance running while in Healdtown. In 1939, he enrolled at the University of Fort Hare where he studied politics, anthropology, native administration and Roman-Dutch law as he aimed to become an interpreter and or clerk of the Native Affairs Department. He returned to Mqhekezweni in 1940, only to find out of an arranged marriage for him, which made him flee from the town to Johannesburg.

While in Johannesburg, Nelson Mandela got work as a night watchman at Crown Mines but was fired as it was discovered that he was a runaway. He later found a job as an articled clerk at the law firm of Witkin, Sidelsky, and Eidelman with the help of a realtor and ANC activist, Walter Sisulu. It was at this time that he got interested in politics as he made friend with Gaur Radebe, an Xhosa member of the Communist Party and ANC.

Nelson Mandela started to attend gatherings of the Communist Party, but could not join their cause because he noticed that instead of seeking for class welfare, the South African struggle was primarily based on race. He later signed up for a correspondence course for a bachelor degree at the University of South Africa. He passed his exams in 1943 but chose to leave in Johannesburg instead of returning to Thembuland as a privy councillor.

Mandela has his share of racial abuse when he enrolled at the University of the Witwatersrand to study law. He was the only black student at the time but was able to make friends with some Europeans, Jewish and Indian students including Joe Slovo and Ruth First. He was into politics more at this time and joined the ANC through the influence of Sisulu. He met other activists, including Oliver Tambiat Sisulu’ Orlando house.

Nelson Mandela became an executive committee member of the African National Congress Youth League (ANCYL). He later became the secretary of the league and in 1947 was elected as an executive member of the ANC’S Transvaal Province branch. He took part in several strikes and demonstrations against the apartheid legislation instituted by the Daniel Francois Malan administration. Mandela, who had now become influential in the ANC became a member of the national executive of the party and later the President of the ANCYL. He subsequently rose through the ranks and held the topmost position of the party before becoming president.

Nelson Mandela's first arrest was during a defiance campaign against apartheid on June 22, 1952, in Durban. He was again arrested under the Suppression of Communism Act in July 1952 and given a nine months imprisonment with hard labour suspended for two years. He was also given a six-month ban from a meeting and talking to more than an individual at a time. He took part in various political activism and was at a time seen as a terrorist and charged with high treason.

His final imprisonment was on June 12, 1964, when Nelson Mandela was accused of sabotaging the government and plotting to with others to start a guerilla war. He was then given life imprisonment though the prosecution called for a death sentence. He served his sentence on the Robben Island for 18 years, and then the Pollsmoor prison for six years and at the Victor Vester prison. He was released on February 11, 1990, when president F.W de Klerk took over as the president and believed apartheid should be abolished and all political prisoners released.

ANC won the majority during the April 1994 elections, and hence Nelson Mandela was also formally elected by the National Assembly to become the first president of South Africa. Thabo Mbeki and Klerk became the deputy presidents. He ensured that the white elites were not sacked from the country as per the experience drawn from other post-colonial African countries whose economies were damaged by such acts. He, therefore, appointed some white minority into his cabinet and set up the truth and reconciliation commission to investigate crimes during the apartheid period.

Nelson Mandela put in place measures to put the economy back on track with the help of World Bank and the International Monetary Fund. He introduced free health care for children and pregnant women in 1994 and was extended to cover more people in 1996. Education was one of his priority area, expanded the national electricity grid and infrastructural development. Although he could have contested for a second term, he stepped down after his first term in 1999.

Nelson Mandela was married thrice with six children. His first marriage was to Evelyn Mase, who was a trainee nurse and ANC activist in October 1944 and divorced in 1957. He then married Winnie Madikizela-Mandela and lastly to Graca Machel in 1998 during his 80th birthday. He died on December 5, 2013, at age 95 from a prolonged respiratory infection.