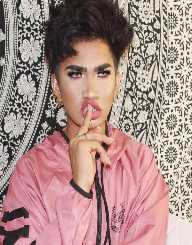 Bretman Rock was born on July 31, 1998, in the Philippines. He lives in Hawaii together with his mother and sister. His parents separated when Bretman was still young.

Rock started out his social media career in 2011 when he joined Twitter and launched his YouTube channel. However, he started to create videos for YouTube only in 2015. He was inspired by a fellow YouTuber Talia Joy, who suffered from cancer. He decided to create his videos and began putting on full-face makeup. Initially, Rock received a lot of criticism for his appearance, but that only inspired him more.

Rock’s biggest motivation is to encourage his viewers to embrace their uniqueness. He also began posting videos on the popular application Vine. These small, 6-second videos fully showed Rock’s sense of humor and charming personality. He posts videos with tutorials on how to do make-up, like “How To Do Your Eyebrows” and “ How to Contour.” Rock currently has more than 6 million followers on Instagram and more than a million subscribers on YouTube.

Rock tries to be himself on all of the social media sites. He continues to remain positive and tries to inspire people to accept themselves. He has often been bullied for his sexuality, but he continues to remain positive. He launched the anti-bullying initiative KissAndMakeup, headed by the Tarte Cosmetics. His official merchandise is also available online at Wnrs Market.