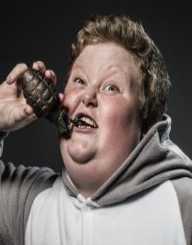 Brandon Bowen was born on January 21, 1998, in Ocilla, Georgia, in the United States where he was also brought up. He grew up to become one of the most talented and famous vine stars in the American state. Brandon was a curious child and loved entertainment which he later would pursue his career. Although not much is said about his education life, Brandon Bowen is considered intelligent and bright by many who have associated with him.

Brandon Bowen began producing vine videos which he uploaded on his website and social media sites and in a short span of time gained popularity. He ventured into the humour world and had since become his fans favourite when it comes to being entertained. Brandon has attracted millions on his social media platforms, and his videos have many views. His starting video was named “#how to go fishing#fishing#comedy” which he launched on 26 June 2013 and in one year he had 1 million people following.

With the number of followers rising, Brandon Bowen was not devoid of critics and haters, but his determined and enthusiastic nature drove him past all this. Brandon posted a Vine video on his social media site which he said was directed to his haters. In the video that only lasted six seconds, Brandon took two spoons and placed them over his eyes motivated by the saying ‘I’m blind to you haters.’  Although during his childhood years Brandon was a victim of bullying and humiliation, he made videos to counteract the effects of bullying.

These videos were full of humour and also a side hit for his haters who would make fun of his body size. Brandon Bowen learnt to be positive and even adopted the nickname ‘Professional Fatty, Amateur Viner,’ to show them he didn’t care much. He has made several videos including ‘Help,’ ‘Donald Trump reaching out to the teenagers’ and ‘Young Donald Trump meets his new neighbours’ among others. He is only 18 years old, and creativity and wit is his style of production with more than 2 million people following.

Apart from posting videos on the vine, Brandon is also active on YouTube with a number of his videos trending therein. With YouTube, Brandon has been able to showcase some of his most humorous short videos including ‘Eric, the drunken weatherman,’ ‘I call shotgun’ and ‘Clown sighting.’ We may not conclude that Brandon has already made it in his career, but with much determination, he is for sure rising to stardom that will be matchless.

Brandon Bowen has chosen to be the voice of the voiceless who suffer in silence in the jaws of adverse bullying. He is a unique figure and personality to most of his fans especially those who are subjected to internet bullying and humiliation. Being a victim himself, Brandon has risen to promote equity amongst the young teens and to advocate that everyone should just be accepted the way they are.

Like an iron sharpening another iron so does man sharpens another and Brandon Bowen chose not to pay back but rather posted humorous videos that were useful. The videos have inspired many to keep up with the spirit of being who they are no matter the situation. Brandon specialty does not only roll in Vine and social media but has also featured in television programs and interviews. He has also starred in a Hollywood movie known as ‘Mono’ in 2016 alongside Christian DelGrosso and Jake Paul who happen to be vine celebs as well.

Much information is not conveyed about Brandon Bowen's childhood or his education line. However, his popularity is worth noting. He is simple and a controversy-free young man with a profession that inspires many young people his age. He is not in any relationship currently even though he has kept his relationship life private apart from family ties. He is known to have a good salary although his net worth is not disclosed and a significant number of followers on both Instagram and YouTube.