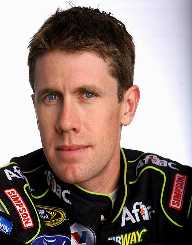 Carl Edwards is well-known for participating in NASCAR Cup Series with wins such as the 2007 Busch Series Championship and the 2011 Sprint Cup Series. He has won several awards including, The 2005 NASCAR Busch Series and Truck Series Rookie of the year in 2003.

On August 15, 1979, Carl Edwards was born in Columbia, Missouri. In 1997, he graduated from the Rock Bridge High School. Later on, he joined the University of Missouri in Columbia where he studied engineering. Carl stopped attending classes after three semesters and pursued his career goals in racing. Before becoming a full-time driver, Edwards took a job as a substitute teacher.

Carl Edwards started his racing career in 2002 when he participated in 7 NASCAR Craftsman Truck Series events for MB Motorsports which he completed. During the same period, he ran a Busch Series race for Bost Motorsports which he finished 38th at Gateway International Raceway.

In 2003 season, he became a full-time Truck series competitor for Roush Racing which he drove the No. 999 Ford F-150 and won the first race that took place in Kentucky. Remarkably, he earned three race wins including a Rookie of the year honors and finished at 8th position.

In 2004,Carl Edwardswon three races, the season-opening including the Florida Dodge Dealers 250 that took place at Daytona International Speedway. By the end of the season, Edwards finished 4th. The same year, he participated in the Roush Racing that took place at Michigan International Speedway with a No.99 Ford Taurus and ended at 10th Position. He used the same Ford for the Nextel Cup and ran for Bobby Benton’s RAB racing at Bristol Motor Speedway.

During the 2005 season, Carl Edwards became a full-time driver in both the Nextel Cup and Busch series. He recorded his first Busch Series win on March 19, 2005, with Aaron’s 312 that took place at Atlanta Motor Speedway in Georgia.

The following day, he won a Nextel Cup series by beating Jimmie Johnson for a Golden Corral 500. His remarkable performance made him the first driver in NASCAR history to win the Busch and Nextel cup and the primary driver to win races in all three organizations racing series.

His fourth and fifth win followed at Texas coupled with another win over Busch Series Rookie of the Year. By the end of the year 2005, he became the second driver in NASCAR history to win most races and to accomplish the race. In 2006 season, Edwards struggled to keep up with the competition, experiencing a wreck during the Rock and Roll in Richmond although he finished second at Michigan.

Carl Edwards won the 2007 Nextel Open followed by another remarkable performance and win during the Citizens Bank 400. However, on July 23, he dislocated his thumb at Nebraska Raceway Park. He won his second race of the season at Sharpie 500 on August 25 and finished 9th in the final standings of the Chase for the Nextel Cup.

On November 3, 2007, Carl Edwards participated in the O’Reilly Challenge winning the NASCAR Butch series Championship at 11th position. During the 2008 series, he won the Auto Club Cup 500, UAW-Dodge 400 and Samsung 500 victories that placed him on top of the standings. He won the season’s finale with a total victory of 9.

Although he started his 2009 season with a crush, he finished the series with five wins at the second position with 210 points. In 2010, he broke the track record for the fastest qualifying lap at the Phoenix International Raceway and dominated the race finishing second during the season finale.

By 2011, Carl Edwards won great eight races, and because he did race the Bucyrus 200, he lost to Jack Roush. During the 2012 season, he announced that he would not compete in the nationwide series and concentrated on Spirit Cup championship.

However, he participated in the NASCAR race which he won and finished 17th at Federation Auto Parts 400. Edwards finished the 2013 season with a 13th position in the final standings followed by season 2014 which he won his 23rd Career NSCS and decided to swath teams by 2015.

Carl Edwards signed a Multi-year deal with Joe Gibbs Racing in 2015 and begun his season with a wreck. However, he took the lead in the Coca-Cola 600 and also parted ways with Darian Grubb and entered the 2016 season with a new crew chief, Dave Rogers.

He dominated the 2016 Food City 500 race and became the first driver to make a lap pass in Richmond Speedway’s history, however, he had a wreck n his final race. In 2017, he stepped away from NASCAR to pursue other opportunities.