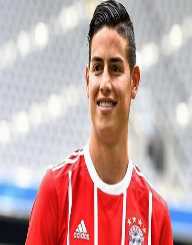 James Rodriguez is a Colombian soccer player. The attacking midfielder and winger may be young but has been playing professionally for years.

James Rodriguez was born on July 12, 1991, in Cucuta, Colombia. His father, Wilson James Rodriguez, also played soccer for the Colombian national team. It was his godfather Juan Carlos Restrepo who brought him up in the sport.

Rodriguez's professional career began at the age of 15 in the Colombian second division club Envigado in 2006. By next year, he was in the first division. In 2008, he signed on with Team Banfield from Argentina.

James Rodriguez impressed the organization as well as his fans with his skills and goals. In fact, he was the youngest foreign player ever on that team.

In 2010, James Rodriguez signed on with the Porto sports club of Portugal for 5.1 million Euros. From 2010 to 2013, Rodriguez had 63 appearances and made 25 goals. He signed on with AS Monaco in 2013. It was one of the most expensive transfers in football at 45 million Euros, especially for the Portuguese team.

Even though James Rodriguez played for Monaco for one year, he still made 34 appearances and 11 goals. The next year he signed on with Real Madrid. With a rumored fee of 80 million Euros for the six-year contract, it made him the most expensive Colombian and the fourth-most valuable player in history.

James Rodriguez claims it was his dream to play for the organization. From 2014 to 2017, Rodriguez has made at least 102 appearances and 31 goals for Real Madrid.

James Rodriguez has also represented his native country on the Colombia national soccer team. In 2007 he was a member of the U17 team, and in 2011 he was a member of the U20 squad. During his time on the U20 team, he participated in three youth tournaments, including the Toulon Tournament. James Rodriguez was named the MVP of that tournament with two goals and three assists. Colombia won that tournament. Since 2011, he has made at least 54 appearances with at least 19 goals for the national team.

As the captain of the national club, the team advanced to the quarterfinals of the 2014 World Cup. This is the farthest that the country has ever been in the tournament. James Rodriguez won two awards during that competition.

James Rodriguez married Daniela Ospina in 2011. The couple has one daughter.

In 2014, James Rodriguez launched his line of energy drinks. It is named 10 Gold after his jersey number and winning the Golden Boot in the 2014 World Cup. All profits went to his foundation “We Are All Colombia.” The organization benefits underprivileged children in Colombia.

LPFP Award for Breakthrough Player of the season, 2011

Portuguese Golden Ball, “A Bola” newspaper for best player in the league, 2012

Golden Boot Award for Most Goals (six in all) and Best Goal of the Tournament, 2014 World Cup