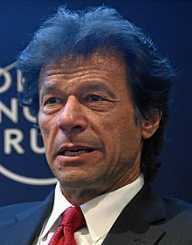 Imran Khan Niazi is a Pakistani politician and former cricketer who is best known for captaining Pakistan to victory in the 1992 Cricket World Cup.

Imran Khan was born in Lahore, Pakistan. His birth date is disputed with many sources citing the 25 November 1952 as his date of birth, while others list it as the 5 October. Khan is the only son of Shaukat Khanum and her husband Ikramullah Khan Niazi. Khan has four sisters and enjoyed an upper middle class upbringing. Khan had two cousins who also represented Pakistan at cricket, Majid Khan, and Javed Burki.

Khan made his first class cricket debut in Lahore in 1970. Khan also represented Oxford University during his time studying there. From 1971 to 1976 Khan also played for Worcestershire County Cricket Club. Khan has played for Sussex, Lahore and New South Wales. In 1971 Khan made his test debut for Pakistan against England in Birmingham. He also made his one day international debut against England in 1974. Upon graduating from Oxford Khan returned to Pakistan and became a permanent fixture in the national team. Khan made a name for himself as a fast bowler, he came third in a fast bowling contest in 1978 with a fastball of 139.7 kilometers an hour.

In 1982 Khan was at the peak of his powers. In a nine test spell he took sixty two wickets and had an economy of 13.29 runs per wicket. Khan became captain of Pakistan in 1982. It was a highly successful time as he led Pakistan to their first series victories over England and India. Khan retired in 1988 but returned when the President of Pakistan requested his return. Khan capped a memorable career by taking the winning wicket at the final of the 1992 World Cup as captain. Khan retired from test cricket in 1992. He had played 88 test matches, scoring 3807 runs and taking 362 wickets. Khan has six test centuries and a top score of 136 runs. His best one day international score was 102 not out.

Retired from cricket Khan entered politics. He founded Pakistan Tehreek e Insaf (PTI), the party is centrist and promotes itself as a third way option against the leftist and conservative parties in Pakistan. Khan is a MP for Mianwali. In 2007 Khan resigned his seat along with 84 MPs in protest against general Musharraf standing for the presidency without resigning from the army. In 2013 Khan turned down the office of Prime minister as it would have meant a coalition with the Pakistan People’s Party. The PTI came second in the election of 2013 and became the opposition for a number of provinces. Khan is deemed a populist and a pacifist. He was highly critical of Pakistan’s actions in Bangladesh in the Bangladesh Liberation War and wants to end Pakistan’s involvement in the war on terror. His opposition to U.S drone strikes has led to Taliban offers of support, having previously made threats against his life.

Khan attended Aitchison College in Lahore and when he moved to England he attended the Royal Grammar School Worcester. He went to university at Keble College Oxford in 1972. He studied Philosophy, Politics, and Economics at Oxford. He studied there from 1972 to 1975 before graduating with honors.

Khan has won a number of awards for his cricketing career. The highlight was winning the 1992 World Cup. He also won the Wisden Cricketer of the Year in 1983, the 1985 Sussex Player of the Year and in 2004 He received an Asian Jewel Lifetime Achievement Award. For his political work and philanthropy, he received the 2007 Asian Sports Humanitarian Award and the 2012 Asia Society’s Person of the Year. Khan is in the University of Oxford’s Hall of Fame. Khan also won Pakistan’s civil award the Hilal-I-Imtiaz in 1992. Khan achieved the second fastest all-rounder’s triple in history by scoring 3000 runs and 300 wickets in just seventy five tests. Khan also ranks third overall on the all-time International Cricket Council’s bowling rankings. Khan also ranks second for scoring average of test batsmen at the number six position in history with a 61.86 average.

Imran Khan has been married twice. His first marriage was to English journalist Jemima Goldsmith. The pair were married in a traditional Pakistani ceremony in Paris in 1995. Goldsmith converted from Anglicanism to Islam. The pair had two sons together, Sulaiman Isa and Kasim. Goldsmith found it difficult moving to Pakistan and was repeatedly attacked by Khan’s political enemies. The two divorced in 2004. Jemima and the children now live in England. Khan married his second wife Reham Nayyar in January 2015 but the pair filed for divorce in October of that year.

Imran Khan is Sunni Muslim. However, he has been supportive of Sunni and Shia conciliation and spoken of Pakistan’s role in achieving an end to violence between the two. He has been influenced by the works of both Muhammad Iqbal, considered the spiritual father of Pakistan, and Ali Shariati, a Shia philosopher.

In 2009 Khan underwent surgery to remove an obstruction in his small intestine. Khan was hospitalized after falling from a forklift in 2013 while giving a speech at a pre-election rally.

Khan was instrumental in the funding and founding of Pakistan’s first cancer hospital. Through his charity, named after his mother, ‘the Shaukat Khanum Trust’ he raised twenty-five million dollars for the hospital. The Imran Khan Foundation, another of his charities, focuses on helping the poor of Pakistan. Khan served as a UNICEF special representative for sports in the 1990s. In his UNICEF role, he supported immunization programmes in the Indian subcontinent.

Khan has endured a number of controversies in his personal, cricket and political life. Khan was known for his flamboyant playboy lifestyle while in England. A U.S court ruled that Khan had fathered a lovechild with Sita White during his time in England. In 2007 a commission in Pakistan rejected the U.S court’s ruling. In the cricketing world, Khan courted controversy in 1994 when he admitted to scratching balls to create greater movements on his bowls. The issue arose over him admitting that he once used a bottle cap to scratch a ball and raise its seam while playing for Sussex. Following these admissions, Khan faced a number of allegations of ball tampering from other ex-cricketers, most notably Ian Botham. The allegations were carried by the India Today publication.

Khan won a libel case against the allegations in a 1996 majority decision. Khan has faced accusations of hypocrisy and populism in his political career. His support for both the tribes on the Afghan border and the educated middle class of Pakistan are seen as incompatible. Khan has also been nicknamed ‘Taliban Khan’ for his alleged closeness with the Taliban and his opposition to the War on Terror and U.S drone strikes. Khan’s marriage to Jemima Goldsmith was also attacked by his political opponents due to her Jewish heritage. Also, Goldsmith was threatened with imprisonment for attempting to export antique tiles in 1999. These charges were later dismissed as unfounded.