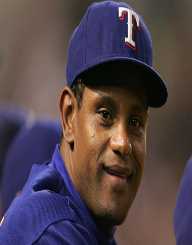 Professional baseball player Sammy Sosa was born on the 12 November 1968 in Consuelo in the Dominican Republic. His nickname with family and friends is Mikey, a name which his grandmother bestowed upon him.

Sammy Sosa spent the bulk of his career with the Chicago Cubs and went on to become a seven-time All-Star, the 1998 MVP and to be presented with the 1999 Hank Aaron Award. Sosa is considered to be one of the greatest baseball players in the history of the game.

In the latter part of his career, he played with the Baltimore Orioles (2005) and in the Texas Rangers (2007).

In mid-2009, Sosa’s retirement from baseball was announced.

Sammy Sosa has been a generous donor to numerous charities. He has helped countless people with his donations to hurricane victims in the country of his birth including assistance with the rebuilding of homes.

Sammy Sosa is married to Sonia Rodrigues, and the couple have six children: Keysha, Kenia, Sammy, Michael, Kalexy, and Rolando

Sammy Sosa was a Sports Illustrated Sportsman of the Year. In 2007 Sosa became the fifth player to reach a 600-home-run milestone.