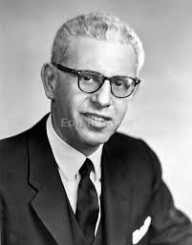 Arthur J. Goldberg alias Arthur Joseph Goldberg was an American lawyer and jurist born in 1908 and died in 1990. The law graduate would later become one of the famous labor attorneys, representing big organizations. The youngest child born to a family with the other seven children was an advantage to him.

His father having died when he was a quite young cut short the education of his elder siblings but spared him. In return, he studied to be a great lawyer which made a significant impact on his life. He would later serve as the precursor to the CIA in the Office of Strategic Services during World War II.

Arthur J. Goldberg, son of Joseph Goldberg and Rebecca Perlstein was born on August 8, 1908, in Illinois, Chicago, United States. Joseph his father earned a living as a Carter.  Goldberg had seven siblings. Sadly, their father passed on in 1916 forcing his older siblings to join the workforce after dropping out of school.

Luckily, Goldenberg, being the youngest, continued with his schooling. In 1924, he graduated from high school. Thereafter, he received a scholarship to join Crane Junior College. Meanwhile, he also took some studies from DePaul University. Later, in 1926, he joined Northwestern University for his legal studies.

Arthur J. Goldberg began practicing his legal career in 1929 in Chicago. It was in 1931 that he began working at Pritzker and Pritzker law firm. However, he left the firm in 1933 to start his practice. It was then that he steadily became prominent. In fact, in 1938, he represented the Congress of Industrial Organizations, CIO.

During the Second World War, Goldberg acquired a position in the Office of Strategic Services. In 1945, the war came to Goldberg grabbed the opportunity by co-founding Goldberg, Devoe, Shadur & Mikva. Thereafter, he served at the firm for 2 years as a partner.

In 1948, Goldberg became the general counsel of both the United Steelworkers and the CIO. Later, in 1952, Goldberg, Feller & Bredhoff in Washington, D.C made him a senior partner. He served at the firm for 9 years and as later secretary of Labor after he was appointed by President Kennedy in 1961. Shortly after, in September 1962, he replaced Associate Justice Felix Frankfurter following his resignation.

In 1970, Goldberg tried for the seat of the governor of New York. However, he lost to Nelson Rockefeller who won by a landslide. As a result, Goldberg decided to continue with his law career in Washington D.C. Later, in 1977, President Jimmy Carter appointed him as the United States Ambassador to the Belgrade Conference on Human Rights.

In 1978, Goldberg was presented with the Presidential Medal of Freedom.

Arthur J. Goldberg tied the knot to Dorothy Kurgans in 1931. They had 2 children and in 1988, Dorothy died.