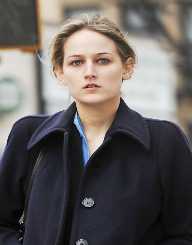 Liliane Rudabet Gloria Elsveta Sobieski was born 10th June 1983, to Count Jean and Elizabeth Sobieski. She was born in New York and is known as Leelee. Her father comes from Polish nobility and is a painter. Her mother is a film producer and screenwriter. As Sobieski’s father is French, she has learned to speak fluent French from him.

Leelee Sobieski has one sibling, a younger brother called Robert.

She attended Trevor Day School, a private high school in Manhattan, and graduated in 2001, and then went on to Brown University, where she studied literature and fine art.

Whilst at school, she was noticed by a talent scout and asked to audition for the role of Claudia in Interview with the Vampire.

Leelee Sobieski didn’t win the part from her initial audition, but later that same year she did win the role of Anna Yates in the movie Reunion, which was made for television. She made other television movies over the next few years.

Her big break came in 1998 when she acted in the movie, Deep Impact. The movie was a huge success financially throughout the world, and she was noticed by several casting directors.

Leelee Sobieski's next film was A Soldier’s Daughter Never Cries, for which she was critically acclaimed.

Leelee Sobieski has acted in roles from comedy to horror, from major movies to independent productions, which shows her versatility. She has acted opposite stars such as Tom Cruise and John Cusack, amongst others.

In 2012, Leelee Sobieski bowed out of the spotlight in early retirement from acting. She didn’t like the amount of sexuality that was required for most movies, so she decided to retire and concentrate on bringing up her children.

Although nominated for several awards throughout her career, including Golden Globes and an Emmy, Leelee Sobieski didn’t win any.

Leelee Sobieski had a brief marriage to Matt Davis in 2008. Davis is a fellow actor.

In January 2009, Leelee Sobieski started dating Adam Kimmel, a fashion designer. The couple became engaged in May but didn’t make the official announcement until July. The couple has two children - a daughter, Louisanna, and a younger son, Martin.