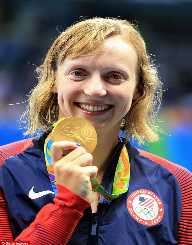 Katie Ledecky was born on March 17, 1997. She is an American swimmer. She is famous because she is a five-time Olympic medallist. She is the record holder in the women’s 400-800 and 1500 metre freestyle.

Katie Ledecky was born Kathleen Genevieve Ledecky on March 17, 1997, in Washington DC, United States of America. She was born to Mary Gen and David Ledecky. She started swimming at the age of six. She was brought up alongside her brother Michael. Her mother was also a swimmer for the University of New Mexico. She attended Little Flower School. In 2015, she graduated from Stone Ridge School of the Sacred Heart. Her swimming career officially began in high school. She set the American and US Open Record two times in the 500 yard freestyle. She also set the record twice at the national, high school record in the 200 yard freestyle.

In 2012, Katie Ledecky made her senior swimming debut at the 2012 United States Olympic Trials. She entered the 200, 400 and 800 metre freestyles. She won the 800 metre becoming the youngest member of the United States Team. In the 2012, London Games she broke the world record in the 800m winning the gold medal. She received training from her coach Bruce Gemmell. In 2013, she set world records in the 800 metre and 1500 metre freestyles winning four gold medals at the 2013 FINA World Championships. In 2014, she won four gold medals at the 2014 Pan Pacific Swimming Championships.

In 2015, Katie Ledecky was the first woman to win the 200, 400, 800 and 1500 metre freestyles in the FINA World Championships. She has been honoured as the FINA swimmer of the year. She is also the USOC’s Olympic Sports Woman of the Year. She is also a three time Golden Google Female Athlete of the Year. In 2016, she set the World Record in the 800 metre freestyle at the Arena Pro Swim Series.

Katie Ledecky became crowned as the second woman to win three individual freestyle events at the Single Olympic Games. In 2017, she won the 200, 400 and 800 metre freestyles at the 2017 World Aquatics Championships. In the same year she won five gold medals and one silver medal in the World Aquatics Championships. She has won many international swimming competitions in her lifetime to date.

Katie Ledecky has won awards such as the Swimming World Swimmers of the Year Award, USA Swimming Athlete of the Year, Golden Goggle Female Race of the Year, Honda Sports Awards Winner for NCAA Division I Swimming and Diving, and she won the Honda Cup among other awards.

Katie Ledecky is currently not married. She is twenty years old. She continues swimming with the help of her coaches Bruce Gemmell and Greg Meehan.