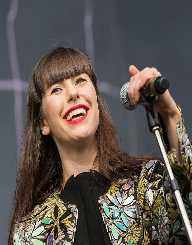 Kimbra was born in was born on March 27, 1990. She is a singer. She is known for her vocals in the hit ‘Somebody That I Used to Know.’

Kimbra Lee Johnson was born on March 27, 1990, in New Zealand. She was born to Chris and Ken Johnson. Her parents held the occupations of nurse and physician. She was brought up alongside her brother, Matthew. Her musical talent was evident from a very young age. At the age of ten, Kimbra started writing songs. At the age of twelve, she began playing the guitar. She admired the work of jazz vocalist Ella Fitzgerald. She attended Hillcrest High School.

Kimbra began her career in 2004 when she came second in Smokefreerockquest which was an annual music contest for young singers in New Zealand. She later on began appearing in large audiences. When she was a teenager she sang the New Zealand national anthem at some games held in the country. Later on NZ On Air provided her with funds to record two singles. The singles were titled ‘Simply on My Lips’ and ‘Deep For You’. At the age of seventeen Kimbra was signed by producer Mark Richardson. She signed with his independent label known as Forum 5. In 2008, she moved to Australia and started working on an album.

In 2010, Forum 5 released her first single titled ‘Settle Down’. In 2011, Kimbra was signed by Warner Brothers Records. She rose to fame for her vocals on Gotye’s International hit ‘Somebody That I Used to Know’. The song received the Australasian Performing Right Association Award and Grammy Awards for best record of the year and best duo performance. She sings many genres of music including, jazz, soul, pop, and electronic.

Kimbra is currently twenty seven years old. She has won a lot of awards during her lifetime. She is a talented singer with excellent vocals.