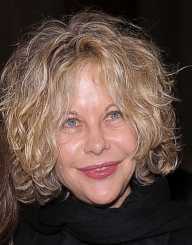 Meg Ryan was born on November 19, 1961, in Fairfield, Connecticut. Her mother Susan Jordan was a former actress and English teacher, but her father Harry was a math teacher. Ryan attended St. Pius X Elementary School and was raised as Roman Catholic. She also has two sisters and a brother. When Ryan was 15, her parents divorced.

After elementary school, Ryan went to study at Bethel High School. She studied journalism and later enrolled at the University of Connecticut and then, New York University. During this time, Ryan had to earn extra money, so she took a role in the soap opera As the World Turns. The soap opera turned out to be a success, and Ryan decides to leave college and pursue a career in acting. She joined the Screen Actors Guild and switched her name from Hyra to Ryan- her grandmother’s maiden name.

Ryan played Betsy Stewart in the drama As the World Turns from 1982 until 1984. She started to appear on several commercials, including the Burger King commercial. Ryan started to get bigger roles in different projects, including Promised Land and Top Gun. In the 1987 movie Innerspace, she starred alongside her future husband, Dennis Quaid.
Ryan’s breakthrough role was in the romantic comedy When Harry Met Sally… in 1989. The role won her a Golden Globe nomination. Her next project was the moderately successful The Doors and Prelude to a Kiss. After these projects, Ryan starred in her majorly successful romantic comedy with Tom Hanks- Sleepless in Seattle. Hanks and Ryan were again paired in the 1998 film. You’ve Got Mail.

Ryan had set herself to be a romantic comedy star, but she chose to take a role in Luis Mandoki’s When a Man Loves a Woman. Ryan played an alcoholic high-school guidance counselor. Her performance garnered her first Screen Actors Guild Award. In 1995 Ryan was known as the soul of romantic comedy and America’s Sweetheart. In 1997, Ryan voiced the lead role in animated film Anastasia, which was a big box office success.

Ryan continued to star in several dramas and romantic comedies. She also starred in the action thriller Proof of Life with Russell Crowe. This project was a box office success and draw a lot of attention to the possible affair between both lead actors.

Until 2007, Ryan took a three-year hiatus from the film industry. She returned to the big screen in Jon Kasdan’s 2007 film In the Land of Women. She played a mother and a wife facing breast cancer. Although the film received mixed reviews, Ryan’s performance was critically acclaimed.

Despite Ryan’s flawless performance and acting talent, some of her projects were unsuccessful. She starred in the 2008 film The Women with an all-female cast. The movie received disastrous reviews but was a financial success. The following year she starred in the independent comedy Serious Moonlight. On this project, reviews were also mostly negative, although Ryan’s performance was acclaimed.

In 2010, Ryan was offered parts in several productions, but they never came to life. The following year she was planning to make her directorial debut in the movie Into the Beautiful, but the project also never materialized.

In 2012 Ryan featured in PBS documentary Half the Sky: Turning Oppression into Opportunity for Women Worldwide. Ryan didn’t appear in films for four years, until 2013, when she starred alongside with Lose Kudrow on the comedy series Web Therapy. Her next film was the ABC’s Fan Girl. In 2015, Ryan finally made her directorial debut in drama film Ithaca.

In 2006, Ryan adopted a 14-month old baby from China. She also dated the singer John Mellencamp since 2014. The relationship was often on-and-off, but the couple finally broke up in 2015.