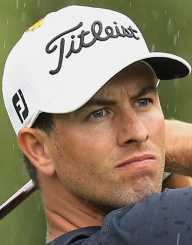 Australian Professional Golfer Adam Derek Scott was born on July 16, 1980, in Adelaide, Australia to his golfer parents Phil and Pam Scott. He had his elementary schooling at the Lady George Kindergarten and started playing the game of golf under the tutelage of his father from the age of four. His family moved to Sunshine Coast, Queensland when he was nine years old.

Adam Scott attended the Matthew Flinders Anglican College there for a brief period before being moved to Gold Coast, Queensland three years later in 1993. He secured his high school graduation from The Kooralbyn International School.

The school is renowned for its excellence in golf coaching and Adam studied golf there as an additional subject. His prodigious talent concerning golf was in plain view during his student days and he was way above his fellow golfer students in respect of his golfing skills and talent while studying at the institute.

His extraordinary golfing talent was soon rewarded by his inclusion in the Golf Australia National Squad. He relocated to the United States soon afterward and enrolled at the University of Nevada, Las Vegas (UNLV).

Adam Scott turned pro during the 2000 season after registering some stirring performances on the European Tour early in the year. His impressive results on the professional circuit earned him the entry card for the 2001 European

Tour season. In the first ever full season as a professional, Adam Scott won the Alfred Dunhill Championship in Johannesburg, his first European Tour title. He also began playing in the U.S. Tour the following year and as a result, started winning tournaments on both sides of the Atlantic.

Adam Scott won the 2003 Player’s Championship thus becoming the youngest golfer ever to achieve such a feat. His 2006 win in the season-ending U.S. Tour Championship is one of the highlights of his career.

He was ranked third among the highest earning golfers of that season. He improved his ranking to No. 3 in the next season and won the Byron Nelson Championship in 2008. However, due to a combination of physical injuries and emotional setbacks, his performance took a beating during the 2009 season plummeting his ranking to as low as 76.

Adam Scott soon overcame the nightmare of his worst performance as a pro and bounced back first by winning the Australian Open in December 2009 and the Valero Texas Open in May 2010, his seventh career PGA tour title.

In 2011 Masters Tournament, Scott finished second after tying with fellow golfer Jason Day and went on to win his first career World Golf Championship under his victory at the 2011 WGC-Bridgestone Invitational.

In the absence of the injured Tiger Woods, Steve Williams, Woods’ longtime caddy, caddied for Scott and became his permanent caddy after being fired by Tiger Woods on July 20, 2011. The win made it possible for Scott to break into the world’s top 10 first time in more than two years time.

The biggest setback of his professional career came in 2012 when Scott blew off a four-stroke lead and bogeyed the final four holes in the Lancashire Open Championship thereby losing the championship to Ernie Els by a whisker. Undeterred, he marched ahead winning the 2013 Masters Tournament in Augusta, Georgia under pressure-packed situations in a splendid fashion.

He continued his good run by winning the FedEx Cup Playoffs, The Barclays in August 2013 and broke into the number two position in the world ranking.

With victories at the Australian PGA Championship and the Australian Masters played at the end of 2013 under his belt, Scott earned the world no. One ranking on May 19, 2014. He became the first Australian to hold the number one ranking in golf after Greg Norman achieved the feat in 1998. He remained on the top for eleven weeks before being replaced by Rory McIlroy in August 2014.

Adam Scott married Swedish architect Marie Kojzar in April 2014 after dating tennis star Anna Ivanovic on and off during 2010 and 2011. Kojzar was his longtime girlfriend during the early and mid-2000s. They eventually broke up only to be reunited in 2013.