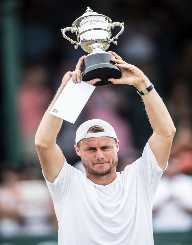 Lleyton Hewitt was born on February 24th, 1981. His place of birth was Adelaide in Australia. He is the son of Glynn and Cherilyn. His father was once an Australian Rules Football player. On the other hand, his mother was a physical education teacher through a netballer by profession.

Lleyton Hewitt was just a boy when he began basic Tennis lessons along with Jaslyn, his younger sister. Meanwhile, he also focused most of his efforts in playing Australian Rules Football. His skills and devotion eventually earned him position one junior tennis player in Austria in 1996. In 1997, Hewitt was accepted to the Australian Open field. At the time, he was about to celebrate his 16th birthday. Therefore, he became the youngest Player ever in Austria to join the tournament.

In 1998, Lleyton Hewitt officially began his career in tennis.  That year, he won in the Association of Tennis Professionals (ATP) tournament and became among the youngest winners. This is after he defeated Andre Agassi during the semifinals and Jason Stoltenberg in the finals during the Next Generation Adelaide International.

In 2000, during the US Open tournament, Lleyton Hewitt won his very first Grand Slam. He was only 19 years at the time. Therefore, he became the youngest Grand Slam doubles crown male winner in the open era. By the end of that year, he qualified for ATP World Tour Finals and once again became the youngest teenager ever to qualify for the tour in ATP history.

In 2001, he emerged the winner of Medibank International held in Sydney. During this time, he also won many tournaments held in London. By the end of the year, his victories added up to six titles.

The year 2002 also saw Lleyton Hewitt in a series of victories. The following year, he won against the unbeatable Gustavo Kuerten during the Indian Wells championship. In the same year, the great Tennis player gained 7kgs.  Apparently, in 2004 he lost in every Grand Slam singles tournament. No player had ever lost in each tournament like Hewitt did. He made history that year. In 2005, he defeated Ivo Miná? and won the title at Sydney Medibank International. In 2016, Hewitt decided to retire.

Besides being a great athlete and tennis player, Lleyton Hewitt is also known to be a philanthropist. He has in the past contributed to charitable causes like Special Olympics and still does.

In 2003 Lleyton Hewitt was declared the Young Australian of the Year and Vogue Australia Sportsman of the Year. In this year, he was also the Most Popular South Australian

During his career, Lleyton Hewitt was presented with Davis Cup Commitment Award. In 2016, he became a Member of the Order of Australia.

Lleyton Hewitt tied the knot with Rebecca Cartwright, an actress in 2005. The couple has three kids: Cruz, Mia, and Ava.