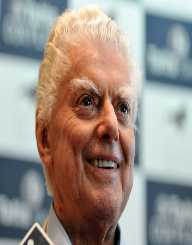 James Bartholomew “Bart” Cummings was one of Australia’s successful racehorse trainers. Born on November 14, 1927, Bart Cummings was seen as an Australian cultural icon and an Australian National Living Treasure. Also known as the Cups Kings or with the initials J.B Cunnings, Bart Cummings won the Melbourne Cup won 'the race that stops a nation,' a record of twelve times. The coveted trainer won 266 Group 1 victories and more than 762 stakes victories throughout his career.

Bart Cummings was born on November 14, 1927, in Adelaide, South Australia to trainer Jim Cummings. His father was the trainer of the great stayer Comic Court that won the 1950 Melbourne Cup. Bart Cummings received his education from the Marist Brothers’ Sacred Heart College in Adelaide, Somerton Park. Bart Cummings dropped out of school at age 14 and started working with his father as a strapper. With the experience of working with his father, he noted,"I had the best of teachers. My dad had a lot of experience behind him, and I picked up from him by watching, listening, and keeping my mouth shut".

In 1953, Bart Cummings received his trainer licence and established a stable at Glenelg in South Australia. Cummings first major win was when he won the South Australian Derby his first Group 1 win in 1958. In the 1958 Melbourne Cup, Bart Cummings had a record of 89 runners with the Asian Court to finish at twelfth. I 1959, his entrant Trellios fronted up and finished fifth. His great success came in 1965, when Bart Cummings fielded three runners in the Melbourne Cup, finishing first with Light Fingers, second with Ziema and eighteenth with The Dip. During the 1965 to 1966 season, Bart Cummings won his first Trainer’s Premiership and went ahead to win the Adelaide, Caulfield, Sandown, Sydney, Brisbane and the Queen’s cups.

Bart Cummings opened the stables, currently called Saintly Lodge at Flemington in Melbourne in 1968. The venue serves as the home to the Flemington Racecourse. Bart Cummings went ahead to win the Trainer's Premiership the first of five that same year. Bart Cummings became the first trainer in the British Commonwealth to train horses to win $1 million in prize money in 1974. The following year, he moved to a new facility called 'Leilani Lodge' near the Randwick Racecourse in Sydney.

His horse Viewed, won him his final Melbourne Cup in the 2008 race as the horse beat its contender Bauer in a photo finish. It was also his 12th Melbourne Cup victory. Throughout his career, he won 12 Melbourne Cups,  seven Caulfield Cups, four Golden Slipper Stakes, five Cox Plate, nine VRC Oaks and eight Newmarket Handicap and thirteen Australian cups. In all, it summed up to 266 Group 1 victories and more than 762 stakes victories.

Bart Cummings received numerous awards and honors including ABC Sportsman of the Year, 1974, and the Centennial Medal, 2000. He was inducted into the Sports Australia Hall of Fame, 1991, Member of the Order of Australia for his services to the racing industry in 1982, and named among the National Trusts 100 Australian Living Legends in 1997. Bart Cummings was the first licensed person to be made Lifetime member of Victoria Racing Club in 2004. The Victoria Racing Club unveiled a precinct at Flemington Racecourse on February 2016, to be named Saintly in his honor.

Bart Cummings married to Valmae"Val" in 1954. The two first met at a church in Adelaide. The couple had five children including five daughters, Sharon, Anne-Marie and Margaret and two sons John and Anthony. Bart Cummings was a Catholic. Bart Cummings died on August 30, 2015, at age 87 in Prince's Farm in Castlereagh NSW, just two days after celebrating his 61st wedding anniversary with his wife. The Premier of New South Wales, Mike Baird, gave him a state funeral on September 7, 2015, at St Mary’s Cathedral, Sydney College Street.

Bart Cummings children Anthony and Margaret disputed over his will, and the case was first heard in the New South Wales Supreme Court on October 28, 2016. Margaret wanted the $30 million estates of Cunnings to be settled exactly per the will. The executor of the will, accountant Aaron Ross Randellwas also sued by the siblings in relation to the final will.

In a related case, the two other sisters Sharon and Anne-Marie, supported by their mother Valmae were also contesting the division of the estate. The Supreme Court Justice Francois Kunc, who heard the case, asked the parties to find an intermediary to negotiate on their behalf and the case be returned to court in February 2017. The mediation, which was undertaken by appeal court judge Keith Mason, QC failed, and hence the parties were ordered by Judge Philip Hallen to submit any further evidence by 30 January. However, after the death of Valmae, issues of the case have subsided.

Two sisters Kimberley and Julia Mander claimed in November 2016, that Cunnings was their grandfather and as he was their fatherPeter Mander’s, father. They claimed Cunning had a relationship with their father’s mother Patricia Kilmartin, which resulted in a pregnancy. The sisters further noted they are ready to undergo a DNA test to prove their claims even though they are not interested in the estate of Cunnings. Cunnings’ daughter Sharon Robinson is also ready to provide DNA samples for the test and ready to meet them if it is proven that Cunnings is their grandfather.