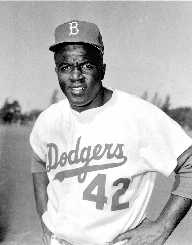 Jackie Robinson was the first African American to play in the Major League Baseball league in the 1940s. This happened after years of racial separation within the sport in the US.

Jackie Robinson was born on January 31, 1919, in the Cairo City of Georgia, USA. His original name was Jack Roosevelt Robinson. Born in a family of sharecroppers, Robinson grew up with his four other siblings under the care of their single mother. In 1920 they moved to Pasadena in California after their father abandoned the family.

Robinson enrolled at the Washington Junior High School graduating in 1935. He studied at the John Muir High School, and later went to Pasadena Junior College. In 1939 he joined the University of California in Los Angeles or UCLA. He did not complete his degree studies. In 1940 he abandoned his studies for a government job at Atascadero, California.

In 1941 he joined the American football league in Honolulu as a semi-professional player. He cut short his career after the entry of the US into WW2.

Robinson enlisted into the US Army in 1942. In January 1943 Robinson became a second lieutenant of the US Army. In July 1944 he came face to face with the racial upheaval in the army. He was commanded to sit at the back of a bus, to give way for another white officer’s wife at the front. Robinson refused to obey the order, terming it racist. In August 1944 the court-martial exonerated him of the multiple charges. Robinson was honorably discharged in November 1944.

In his military career, he never engaged in combat. When his unit was deployed for combat, Robinson remained behind to face his court-martial proceedings. Still, in the army, he served as the army athletics team coach after his acquittal from the court charges.

Soon after leaving the army, he joined a Negro professional baseball league. In 1946 he joined the Montreal Royals. This was a white only team. As the feeder team to the Brooklyn Dodgers, Robinson got the opportunity to scale up the ladder into the major league. With the support of the team’s president, Robinson managed to steer away from the racial prejudice he faced at the start of his career. He got racial slurs from his teammates and the white crowds on the field. On the extreme part, his family got threatened with racial instigated violence. He was promoted to the Brooklyn Dodgers first team in 1947. He became the first Negro player to grace the white Major League Baseball since the turn of the century.

In the wake of the racial intimidation form all sectors, Robinson became the Rookie of the Year in 1947. After proving his worth on the field, Robinson silenced most of his critics. In 1949 he became the league’s Most Valuable Player. He continued playing impressive seasons for the Dodgers until 1955. After a trophy drought for four seasons, Robinson helped his team win the 1955 World Series title. Dodgers celebrated the victory over their arch-rivals the New York Yankees. In 1956 he moved to the New York Giants baseball team. In 1957 he retired from the game at the end of the season after a decade long career.

Robinson continued his fight for racial equality in the business world. He promoted the black-owned businesses through the formation of the Freedom Bank. This was an African American privately owned commercial bank.

In politics, he joined the National Association for the Advancement of Colored People or NAACP. He became a board member up to 1967. He used his celebrity status to fight for the greater integration of the black players in the segregated sports in American leagues.

He was also a vocal figure in the fight against drugs in the American youth. Robinson lost one of his sons due to drug abuse related issues.

He got married to Rachel Robinson while still a student at the UCLA. They had three children in their union.

After a fight with failing health, Robinson died on October 24, 1972, of a cardiac arrest in Connecticut. He was buried at the Cypress Hills Cemetery in New York.

Rachel Robinson started the Jackie Robinson foundation soon after his death. The US Postal Service released a stamp bearing his portrait. Several parks and streets in the US are named after him. Former US President Bill Clinton posthumously honored him in a somber ceremony in New York. The Major Baseball League Rookie of the Year Awards were renamed Jackie Robinson Award.