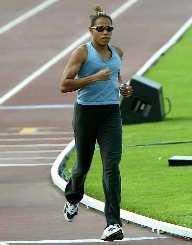 Australian athlete Cathy Freeman was born on 16 February 1973 in at Slade Point in Mackay, Queensland, Australia. Freeman was raised in a housing commission area in Macky. Her extended family lived at Woorabinda, an Aboriginal mission three hours drive from Mackey. Norman, Cathy’s father, went to live in Woorabinda when Cathy Freeman was young, and she would visit him there. Freeman’s mother remarried, and the family moved around, living in many towns. Freeman’s stepfather, Bruce Barber, noticed her athletic ability and encouraged her, training her from a young age.

Cathy Freeman was educated at the Kooralbyn International School and Fairholme College, Toowoomba.

Romanian Mike Danila took over Freeman’s coaching from Bruce Barber in 1987 when Cathy Freeman enrolled at Kooralbyn International School. Then in 1989, she won a scholarship to Fairholme College. Freeman was starting to show her class by running 11.67 seconds in a 100-meter event.

Freeman made history in 1990 when she competed in the Auckland Commonwealth Games as part of the 4x100 relay team which won gold. The win made her the first Aboriginal Commonwealth Games individual gold medallist. At sixteen years of age, she was also one of the youngest.

After the Commonwealth Games in 1990, Freeman was living in Melbourne, and here she met Peter Fortunate, who became her coach. Following her success in New Zealand, she was chosen to represent Australia at the 1990 World Junior Championships in Athletics, held in Bulgaria. Freeman managed fifth in the 400m and made the semi-finals in the 100 meter. In 1992, Cathy Freeman won a silver medal at the World Junior Championships, in South Korea. Freeman had her first experience of the Olympic Games, held in Barcelona, Spain in 1992. Freeman ran the 400 meters and reached the second round. Then in 1983, at her third World Championships in Athletics events, she competed in the 200 meter and reached the semi-finals. At the Commonwealth Games in Victoria, British Columbia, Freeman won gold in the 200 meter and the 400 meters. The Australian 4x100 team won silver.

In 1995 Freeman reached the semifinals in the 200 meters at the World Championships in Athletics, Sweden. In the 1996 Olympics, she finished second behind Perec and set an Australian record, 48.63 seconds. During 1998, Freeman suffered an injury, and this put her running on hold until the 1999 season. At the Sydney Olympics 2000, Freeman was a torchbearer. She won the 400 meters in 49.11 seconds and are many icon images of her running a victory lap wrapped in the Aboriginal and Australian flags.

Cathy Freeman has won an impressive number of awards. She was made Australian of the Year (1998). Freeman won the Australian Sports Medal in 2000. The Centenary Medal in 2001. In 2001, she received the Olympic Order of Juan Antonio Samaranch. She also won the Laureus Sportswoman of the Year (2001 as well as the Arthur Ashe Courage Award 2001. Freeman was inducted into the Sports Australian Hall of Fame in 2005 and the Queensland Sports Hall of Fame in 2008.

Cathy Freeman has had three significant partners. The first was Nic Bideau. He as a journalist with The Herald Sun, based in Melbourne. They were together for some years. He proposed, but eventually, the relationship broke down when Freeman discovered that he was seeing Sonia O’Sullivan, an Irish athlete, behind her back. Her second relationship of note was with Alexander Bodecker, an American who worked for Nike. Freeman met him in the United States. They married, but after the Sydney Olympics, their relationship started to unravel. Bodecker fell ill with throat cancer shortly after their separation, and Freeman took off a season to support him. Bodecker recovered, and Freeman was hoping that their relationship could be salvaged. Things did not work out that way, and they divorced. At the time of writing her autobiography, Freeman was dating actor Joel Edgerton, but that relationship has since ended.

Cathy’s mother brought up her children in the Roman Catholic religion. Later, she changed to the Baha'i faith.

Since retirement in 2003, Cathy Freeman has devoted a lot of her time to projects benefiting Aboriginal and Torres Strait Islanders. She has work in the media as well as appearing in television shows. In 2006, she was involved in Going Bush, a series visiting remote communities in the north of Australia.

The Cathy Freeman Foundation was established in 2007. Cathy Freeman did this to assist Aboriginal and Torres Strait Island children in need. Her chief focus for the foundation is providing assistance and support to children so they can benefit from have a good education.

Cathy Freeman will go down in history as the first Australian Aboriginal to win an individual Olympic gold medal. She was also a torchbearer at the 2000 Summer Olympics, and after her 400-meter win, she did a victory lap wrapped in both the Australian and the Aboriginal flag.

Cathy wrote her autobiography with the assistance of Scott Gullan. The title of her book is Born To Run.