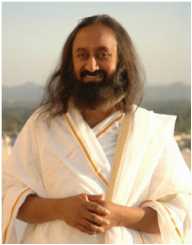 Indian spiritual leader and founder of the Art of Living Foundation Sri Sri Ravi Shankar was born in Papanasam, Tamil Nadu, India on the 13 May 1956. His parents were Visalakshi Ratnam and R. S. Venkat Ratnam.

A gifted student, Sri Sri Ravi Shankar could recite verses of the Bhagavad Gita at a young age. By seventeen, he had a degree, and he was later awarded an honorary doctorate from Kuvempu University in India.

He opened his first rural school close to Bangalore, India in 1981.

After he became an enlightened master in the early 1980s, Sri Sri Ravi Shankar dedicated himself to serving society, and he has millions of followers worldwide.

Sri Sri Ravi Shankar travels widely promoting peace, social responsibility, and wisdom. Other initiatives include the establishment of the International Association for Human Values in Geneva Switzerland (1997). The 5H programme for rural development. The Youth Empowerment Seminar (1998) and the Youth Leadership Training Programme (2000).

Forbes Magazine named Sri Sri Ravi Shankar as the fifth most powerful leader in India (2009), and he has won many other accolades and awards. These awards include the Bharat Shiromani Award, India (2005), the Order of the Pole Star, Mongolia (2006), the Sivananda World Peace Award, South Africa (2012), the Padma Vibhushan, India (2016) and the Dr. Nagendra Singh International Peace Award, India (2016).