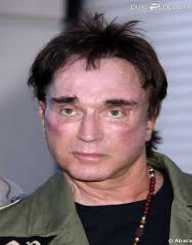 It was on October 3, 1944, in Nordenham Germany that Roy Uwe Horn was born to Joanna Horn. He was born while his father was fighting on the Russian front during WW ll. Before that, his father was an orchestra leader. Just after the war ended, his mom and dad divorced. Roy was the youngest of 4 boys. His older brothers were Manfred, Alfred, and Werner.

Roy Horn's mom remarried a construction worker. At first, things seemed to go well. But then his stepfather started drinking, and his childhood became an unhappy one. His only happiness was being with his half dog half wolf Hexe and spending time at the zoo in Bremen from the age of 10 on.

It was at the zoo where he befriended a cheetah named Chico. Eventually, he was allowed to take the cheetah on walks, and he helped to take care of her. His moms’ friends gave him unlimited access to the zoo for his birthday because of his love of the animals.

Roy Horn left home at the age of 13 to work on a ship belonging to North German Lloyd. The ship almost sank and was rescued by a ship called the United States. They were toed to New York Harbor. Once the ship was fixed, he returned home. But he did not stay.

In 1957 Roy Horn worked as a waiter on an ocean liner. It was on this boat he met Siegfried Fischbacher. Siegfried worked as a steward while performing magic tricks on the side. Roy then became Siegfried’s assistant performing throughout Europe over the next five years.

While performing in Monte Carlo, a scout spotted them and invited them to perform in Los Vegas. They have worked together for more than 30 years. Over the years the two created a compound outside Vegas for the birth, care, and conservation of the animals in their act.

On October 3, 2003, one of their tigers attacked Roy Horn on stage almost killing him. They closed the show after this attack. He maintains to this day that he fainted on stage and the 7-year-old 300 lb. tiger was trying to help by dragging him off the stage.

Then in 2004 a television series called “Father of the Pride” was started. But the show only lasted a short time. Siegfried and Roy had a final appearance with Montecore, the tiger who attacked Roy, as a gift for the “Lou Ruvo Brain Institute." The tiger died in 2014. Finely They retired from show business on April 23, 2010. They are worth a combined total of $120 million.