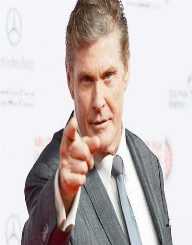 David Hasselhoff was born on July 17, 1952. He is popularly known as ‘The Hoff.’ David set a Guinness World Record as the most watched man on television. He is an American producer, actor, singer and businessman. He starred as ‘Michael Knight’ in the Prime Time show ‘Knight Rider.’ The show was a hit in the United States and overseas. This show made him popular with the public, and he made a name for himself. He also starred in the film ‘The Young and the Restless.’

David Hasselhoff Michael was born on July 17, 1952, in Baltimore, Maryland. He was born to Dolores Therese and Joseph Vincent Hasselhoff who was a business executive. His family first lived in Jacksonville, Florida before moving to Atlanta, Georgia. He attended Marist School where he showed interest in acting, singing, and dancing. Since he was a child, he had wanted a career in Broadway. In 1970, he graduated from Lyons Township High School in La Grange, Illinois. He, later on, joined Oakland University and again attended the California School of Arts where he graduated with a degree in theater.

In 1973, David Hasselhoff landed a role in the soap opera ‘The Young and The Restless.’ In 1979, he appeared in the film ‘Starcrash’ acting as ‘Simon.’ David was not only interested in acting but also in singing. He started his singing career when he performed in ‘Kids Incorporated.’ In ‘Kids Incorporated’ he performed the song ‘Do You Love Me.’ In 1984, he appeared in ‘Different Strokes’ and ‘Santa Barbara.’

In 1982, he was recruited by Brandon Tartikoff to star in the science fiction series ‘Knight Rider’ as ‘Michael Knight.’ His role in the show got him the People’s Choice Award for ‘Most Popular Actor.’ The show was a success in the United States and overseas as well, and it is being watched to date. During the ‘Knight Rider’ tour in Germany, David trained with Patsy Swayze.

In 1989, he appeared in the series ‘Baywatch.’ The series was however canceled after one season. In 1991, he revived the series for the first run syndication. In the revival of the series he acted as the executive producer, and he also used his finances to get the series running. The series was a success the second time. It ran for eleven years, that is, from the 1990s to 2001. The series had a lot of viewers all over the United States and overseas.

In 1991, David starred again in the sequel ‘Knight Rider 2000’ as ‘Michael Knight.’ In 1996, his name was recorded in the ‘Hollywood Walk of Fame.’ In 2004, he starred in the movie ‘The SpongeBob SquarePants Movie.’ He also appeared in the movie ‘Dodgeball: A True Underdog Story.’ In 2006, he starred in ‘The Producers’ a role which was handed over to him by Mel Brooks.

In the same year, David Hasselhoff became a co-judge on NBC’s ‘America’s Got Talent.’ In 2010, he guest hosted professional wrestling’s ‘WWE Raw’ in London. In 2011, he was a guest judge at the Belgian Idols competition. In 2014, he opened his own ten-week talk show in Sweden on TV3, this he did in English.

In 1983, David Hasselhoff won the People’s Choice Awards for ‘Favorite Male Performer in a New TV Program.’ In 2005, he won the International Star of the Year Award for Outstanding Contribution to Global Entertainment. In 2010, Comedy Central put up a name for him ‘The Comedy Central Roast of David Hasselhoff.’

In 1984, David Hasselhoff married actress Catherine Hickland whom he divorced in 1989. In 1989, he married an actress, Pamela Bach. They have two daughters together. They divorced in 2006 because of irreconcilable differences. He has custody of both his daughters.