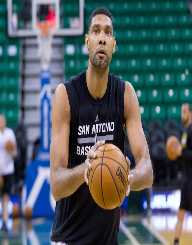 Is there a true story behind Tim Duncan? The one that makes you stand as you sing ‘Go! Go! Our Olympian, I bet there is. For all that he has managed to accomplish, he always counts his unfinished task. Tim’s day starts with a remarkable mark, knowing that good is yet to come. In his way, he found himself in the basketball world. At a glance, you might think that he originates from a successful powerhouse. But No! Wait till you hear that he didn’t even dream about any basketball court. Duncan didn’t grow in a laxative environment. Right from his small U.S Virgin Islands, Duncan is now a basketball senior. Little did he know that he would be ranked as the very first player from St. Croix to play the NBA regular season.

Growing up as Timothy Theodore Duncan, he was first seen in the world on April 25, 1976. He spent his childhood days in his motherland; St. Croix, United States, Virgin Islands. Tim adored his mother Ione who was by then a learned midwife while his father, William worked as a mason. Duncan was used to living in his small town with lots of babies but little to no building. Either way, his parents inspired him to work harder and live a comfortable life. Little Tim had a brilliant mind that made him move to the grade levels at his tender age. He has two sisters, Tricia and Cheryl; they used to tell him that he had a good physique for swimming and not basketball. Following his sister's footsteps, Tricia encouraged Duncan to try the swimming field. Luckily Tim had already made up his mind and wanted to become an Olympian. Ione and William supported Tim right from the start.

Tim Duncan managed to learn how to swim, and he was later ranked as the top United States competitor, thanks to his 400 meters of freestyle swimming. In 1989, his dream was cut short by an occurrence of a Hurricane Hugo. Everything was destroyed including his club’s pool. Afterward, her mother died, and Tim opted to quit his swimming career. He went ahead with his high school studies and began to search for another career. He came to love the basketball field. Before completing his studies, Tim had already learned basketball tricks as well as improving on different niches. It happened that several colleges such as University of Delaware, Providence University and the University of Hartford wanted him to join their basketball team.

In the mid of 1993, Tim enrolled at Wake Forest University in North Carolina. He knew that there was an enormous opportunity waiting for him in the outside world. But in reality, he promised his mother that he would come to complete his college studies. He obliged to his promises and graduated with a degree in Psychology. In a short time, Tim managed to learn different tricks, and an All-American name rose up. From 1996 to 1997 Duncan’s skills improved to the mark. He again received an All-American name and the NCAA player of the year. He was later chosen to play for the San Antonio Spurs team in 1997.

From 1997 to 1999 David proved to be a lethal scorer. At the rookie year finale, Tim played 21.1 average points and 11.9 rebounds. He was equally on the journey to win the NBA’s Rookie Award. Afterward, he managed to lead his team at the New York Knicks as he averaged 28.4 points and 14 rebounds. Duncan was later named as the Most Valuable NBA’s Player. He also collected the Finals MVP Award. Lots of people criticized him due to his 7-foot height, but he was perfect when it came to taking shots. Early 2016 Tim Duncan retired as he managed to complete 19 good seasons as well as winning five championships.

In 2001 Tim Duncan married his college girlfriend, Amy. They separated later after twelve years. The couple has a daughter and a son. Besides being the best basketball player, he is also active in other works. He came up with The Tim Duncan Foundation that promoted education, health as well as recreation causes. He manages other social programs such as the Children’s Bereavement Centre as well as the Cancer Therapy and Research Centre.