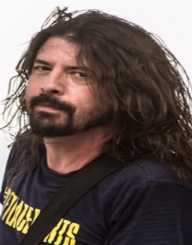 The rise of American rock music is attributed to Dave Grohl who gave it face to date. With an involvement in various bands rock bands, two orchestras defined this man; the Nirvana - as a drummer, and the Foo Fighters as a founding member. Born on 14th January 1969, at the age of 10, Dave already had a band. The passion for band activities made him drop out of high school to join the hardcore group before ending up with Nirvana that made him an international star. Foo fighters came in as an alternative band after the demise of Kurt Cobain.

Dave Grohl was the son of an English teacher and a journalist who lived in Ohio. At the age of three, they moved to Ohio to Virginia. At the age of 6 with his older sister Lisa, they started living with their mother alone after the parents separated by a divorce. His passion for music began at that young age by playing the guitar. After dropping out of the junior level, the hardcore band he joined enabled him to feature on their album in addition to the group tours.

In 1990, while on tour with the hardcore band, he met with Kurt Cobain and Novoselic who were both members of Nirvana band. He was interested in joining them as a drummer because they were the big hit at the moment. He was successful at the audition and was absorbed by the two.

Nirvana grew and signed with Geffen Records, and their first release came in 1991. All the three contributed to the massive hit. One of their hit songs called 'Nevermind' sold over 4 million copies in almost a single year. Their songs were emotional, raw and mostly depicted frustrations and alienations in the society. Their message is what led to the rise of the grunge movement.

The fame of all that success pushed Cobain to engage deeper in drug abuse. The relationship among band members was also put on the strain. That pushed Dave Grohl to participate in a solo project of recording few tracks meant for cassette only. In 1994, the band made another studio album that was a success too.

However, the drug addiction on Cobain was taking a toll on him, and he became more depressed and distant. On the band's tour, he attempted suicide in March 1994. He made his life at his home on April 6th, 1994. After his death, the remaining ones won a Grammy award in the very year.

Dave Grohl went ahead to form this band The Foo Fighters after Nirvana. The songs he wrote from Nirvana were among the first ones he released in his new group alone in 1995. The songs earned positive reviews and topped charts everywhere. He brought on board three other members when the time came for the tours.

Their first album as a full band came in 1997. It was a success and propelled them to win the 2000 Grammy award for having the best rock album. Other Grammy awards followed for the band and individual members for the next two consecutive years. This group was viewed as the one that took rock music to another level. They got involved in many band tours to promote their records.

To maintain such high-profile music career, you need support outside the music lifestyle. Dave Grohl is a devoted husband and father. He has been in marriage since 2003 to a television producer called Jordyn Blum. They were blessed with a girl named Violet in 2006. Before this union in 2003 however, Grohl was married to Jennifer Youngblood who was a photographer.