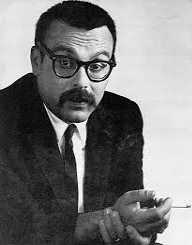 Jazz pianist and composer Vince Guaraldi was born Vincent Anthony Dellaglio on the 17 July 1928 in San Francisco, California. He was raised by his mother Carmello Marcellino and his stepfather Tony Guaraldi, whose surname he adopted, dropping his biological father’s surname. As a child, he had piano lessons and was also a boy scout.

Vince Guaraldi was a pupil at Abraham Lincoln High School, San Francisco. After his war service in the Korean War (1950-1953), he enrolled at San Francisco State University.

In the early 1940s, Vince Guaraldi had music training with Leonard Auletti, who was a bandleader, composer and jazz pianist. When the Korean War broke out, Guaraldi was enlisted and worked as a cook in the US Army (1950-1953) in Korea.

Once back home he immersed himself in the music scene of San Francisco where he discovered jazz clubs including The Black Hawk. One of his early gigs was performing during intermissions at the Black Hawk at a time Art Tatum was playing at the club. In 1951, Vince Guaraldi joined Cal Tjader’s trio and appeared on their first album. He left to form his trio but continued his musical collaboration with Tjader.

Vince Guaraldi rejoined the trio in 1955, contributed to their records and joined them at the Monterey Jazz Festival in 1958. In 1955, he had also begun appearing with his quartet.

In addition to his music, he continued playing, writing music and collaborating with others including the Ron Crotty Trio, Thundering Herd, Brew Moore, and other musicians.

In 1956, Vince Guaraldi released The Vince Guaraldi Trio album. Then in 1862, he had a breakthrough with Jazz Impressions of Black Orpheus which included his composition Cast Your Fate to the Wind. Guaraldi went on to win a Grammy for Best Original Jazz Composition.

Guaraldi also continued recording albums, performing live and working on other television projects, including a stint as a keyboardist with the Grateful Dead. Albums included Christmas (1965),  Oh, Good Grief (1968), Alma-Ville (1970) and The Eclectic (1969). The final Charlie Brown score he completed was It’s Arbor Day (1976).

A Charlie Brown Christmas was voted into the Grammy Hall of Fame (2007) and it is also regarded as a culturally significant American recording by the US Library of Congress (2012). Guaraldi won a Grammy for Best Original Jazz Composition for Cast Your Fate to the Wind (1963).

In 1998, Fantasy Records released Charlie Brown’s Holiday Hits, a CD which included previously unreleased tracks. Then in 2003,  David Guaraldi and Bluebird Records Charlie Brown Suite, a life, orchestrated performance which was recorded in May 1969. Vince Guaraldi was featured in the award-winning documentary The Anatomy of Vince Guaraldi (2009).