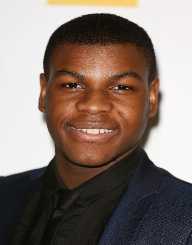 John Boyega is a British actor and producer born on March 17th, 1992. He is best known for his role in The Force Awakens, Episode VII of the 2015 blockbuster Star Wars. He was cast in the film as Finn. The young actor is also famous for his role in Attack the Block (2011) as Moses. John Boyega realized his talent early in life. He began acting while in primary school. His talent has earned him some awards during his acting career. In 2011 he was honored with a British Independent Award. The following year, he was awarded Black Reel Awards three times.

John Boyega was born John Adedayo B Adegboyega on March 17th, 1992. His place of birth was in London, England in the United Kingdom to Nigerian parents: Samson and Abigail. His father is a preacher and wanted his son to follow his footsteps. However, John Boyega chose to pursue his dream of acting, and his father supported his decision.

John Boyega began his elementary studies at Oliver Goldsmith Primary School. The nine-year-old actor began acting while in school. As a result, his skills were noticed by Theatre Peckham’s artistic director Teresa Early. This was a theatre for young actors especially those from South London. Luckily for John Boyega, he had hardship fund which helped him join the theatre.

John Boyega later joined Westminster City School in 2003 for his high school education. Since 2008 till 2010, he studied in Wandsworth campus of South Thames College. While there, he majored in Performing Arts for his National Diploma. Later, he took BA Film Studies & Media Writing courses at the University of Greenwich where h studied. However, he discontinued the course after a while and focused on his acting.

John Boyega officially began his film career in 2011 with his role in Attack the Block. In the same year, he was also cast as Jamal in Junkhearts. The following year, he starred in My Murder and later a supporting role in the 2013 film Half of a Yellow Sun. In 2014, Boyega played a major role in Half of a Yellow Sun as the lead cast.

The year 2015 marked a career turning point for the upcoming star in the film, John Boyega. His role in Star Wars: The Force Awakens took him to great heights of his acting career. He was cast as Finn in the film.

John Boyega established his production company known as Upperroom Entertainment Limited in January 2016. In the same year, he was cast in Detroit, a film by Kathryn Bigelow.