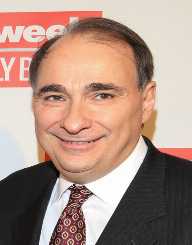 David M. Axelrod is an American political analyst and consultant. Born on February 22, 1955, he was the chief strategist for the presidential campaign of Barack Obama. After successfully strategizing for the campaign to achieve success, his work was compensated with an appointment as the Senior Advisor to the President.

David Axelrod resigned from his position in 2011 to serve as the senior strategist of for Obama’s re-election campaign in 2012. Axelrod is currently the director of the Institute of Politics at the University of Chicago. David M. Axelrod is also a Senior Commentator for CNN.

David Axelrod was born on February 22, 1955, in Manhattan, New York to Myril Bennet and Joseph Axelrod. His mother was a journalist at PM and later worked as an advertising executive at Young & Rubican and his father a psychologist. He grew up in Stuyvesant Town. Axelrod received his early education at Public School 40 in Manhattan.

At the age of eight, his parents divorced. He continued his education at Stuyvesant High School graduating in 1972. He then enrolled at the University of Chicago to pursue Political Science. While there, he wrote on political issues for Hyde Park Herald and later did his internship with the Chicago Tribune.

Having done his internship with the Chicago Tribune, the company hired David Axelrod after graduating from school. He worked there for eight years covering different issues including national and local politics.

David Axelrod was adjudged Tribune’s youngest political writer in 1981. Axelrod rose to become the paper’s City Hall Bureau Chief and a political columnist at the age of 27.

David Axelrod had interest in politics at his young age. In an interview with the Los Angeles Times, he said, "I got into politics because I believe in idealism. To be a part of this effort that seems to be rekindling the kind of idealism that I knew when I was a kid, it's a great thing to do. So I find myself getting very emotional about it.” In 1984, he quit his job at the Chicago Tribune to work as the communication director for the campaign of US Senator Paul Simon. He later became the co-campaign manager. After the campaign, he formed Axelrod & Associates, a political consultancy firm. In 1987, he was involved in the re-election campaign of Harold Washington, the first black Mayor of Chicago.

His work with Harold gained him the expertise of working with black politicians. He later worked with several other black politicians including Anthony A. Williams in Washington, Dennis Archer in Detroit, Lee P. Brown in Houston and Michael R. White in Cleveland among others.

David Axelrod and Barack Obama first met in 1992 and since then had an excellent relationship. In 2008, he needed to make a difficult decision as to which of the candidates to work with.

David Axelrod had previously worked with Barack Obama, Hillary Clinton, John Edwards, Tom Vilsack, and Chris Dodd. He had a personal relationship with Hillary Clinton as she had raised funds for Citizens United for Research in Epilepsy, founded by Axelrod's wife and mother. He finally settled on Obama becoming the chief strategist and media advisor for Obama.

The campaign was successful, and aside from winning to become the Democratic Party’s presidential nominee, Obama won the presidential election. Obama appointed Axelrod as a Senior Advisor to his administration on November 20, 2008. He served in that position until 2011, when he resigned. He also served as the chief campaign strategist of Obama’s re-election campaign in 2012.

That same year he joined NBC News and MSNBC as a senior political analyst. He held that position until September 2015, when moved to CNN. He worked with the British Labour Party as a senior strategic adviser, assisting the party’s leader Ed Miliband prior to the 2015 general election.

David Axelrod married Susan Landau in 1977. The two met at the University of Chicago. He published the book Believer: My Forty Years in Politics in 2015.