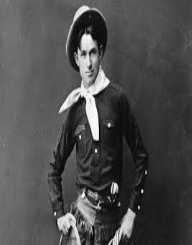 Will Rogers was the youngest child of eight children. He was famously known as Vaudeville Performer Humorist and an energetic actor. He loved everybody he met, and his humor was out of this world. In 1934 he appeared in Judge Priest film and Steamboat Round the Bend in 1935.Before fame, Will envied to have his ranch in Argentina. It sounded ironic for him to become a famous American actor while he was a quarter Cherokee native.

On November 4, 1879, William Penn Adair Rogers was born in Indian Territory now Oklahoma, Oologah, United States. Both of his parents, Mary Schrimsher and Clement Vann Rogers were relatively Cherokee descent. Will loved to spend his childhood days on their family ranch. It was then that he learned to lasso as well as working at the cattle ranch. Since his childhood days, Will was a rope lover. It came to the point that he was named in the Guinness World Book of Records when he practiced throwing three lassos all at once. One rope went around the rider; another went around the horse’s neck, while the third one flew under the horse. It was an incredible scene when people saw him looping at once.

From 1897 to 1898 Will attended Kemper Military School. Unfortunately, he became a cowboy after dropping out. From 1902 to 1903 Will loved to travel far and beyond. He got a chance to go to South Africa where he played ‘The Cherokee Kid.' He later moved to New Zealand and Australia in collaboration with Wirth Brothers Circus. In 1904 Rogers went back to the US and presented his talent at the World’s Fairs in St.Loius. From 1905 to 1915 Will continued to extend his career by touring different circuits in America, Europe, and Canada.

In 1917 Will Rogers elaborated his lasso skill talent in an ideal venue at Ziegfeld Follies that he became an audience favorite. But he always regretted while he didn’t complete his studies. He loved to read and to talk to people. He came to embrace the two interests that they became part of his nature and humor. He focused more on real observations such as life and individuals with an escort of his intelligent. He hated to beat around the bush; his jokes had a simple language that even a one year could understand. The audience responded positively more on his side of humor than his dance skill.

In the mid of 1918, Rogers started to appear in countable films, including Laughing Bill Hyde, The Ropin’ Fool in 1921 among others. When the first soundtrack (talkies) was introduced, Will turned into a star. He was credited in 1929 for his talking films such as They Had to See Paris, followed by State Fair in 1934.His country roots and easy to understand language acted like a charm. As he continued to progress in his career, Will appeared in 71 films and numerous Broadway productions. In 1934 Rogers was voted as the most famous male actor in Hollywood. Since then, His career broadened beyond his expectation.

In 1925 Will Rogers started to write his own books. That is where he came up with six books and 4,000 combined columns. He was obliged to become a radio broadcaster guru as well as political commentator. According to him, politics was the ideal show in the world while Congress was national joke factory. His intelligence, honesty, and humor earned him more respect to the point of being nominated as the governor of Oklahoma. However, he declined the seat and later he chaired the Beverly Hills Mayor seat. In the process, he was glad to visit President Calvin Coolidge and Franklin Roosevelt at the White House.

In November 1908 Will Rogers married Betty Blake. The couple was blessed with four children; Mary, Fred, James and Will Jr. Mary became a famous actress; Will Jr. became a World War II hero while James became a dedicated rancher. In 1935 Roger’s planned a vacation with pilot Wiley’sPost. As a great reporter, Will used to travel far and beyond. He had a chance to visit London, Egypt, South America, Moscow, Japan and America at large. On August 15, 1935, Wiley’s and Rogers’s flight crashed near Alaska, taking both of their lives. His sudden death saddened his fans and the whole nation. President Franklin Roosevelt dedicated a structured Memorial in Claremore where Will was buried. His son, Fred died at the age of two and Betty died the same year, and she was concealed beside her child and husband.

Will Rogers political sayings and writing continues to bring relevancy to politics of today. In his honor, The Will Rogers Institute was established which helped to fund the research on the pulmonary disease. He was a true hero who left a mark that will never come to be occupied.