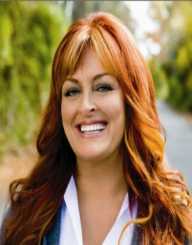 Wynonna Judd was born on 30th May 1964 in Ashland, Kentucky. She was the love child of Naomi Judd and Charles Jordan. Her birth name was Christina Claire Ciminella and her surname Ciminella came from Michael Ciminella; the man, Wynonna’s mother, got married to after being abandoned by boyfriend Charles. Naomi Judd was only 18 years old at that time and married Michael just a few days before the birth of Wynonna. In 1968, the family moved to Los Angeles. Shortly thereafter, Wynonna’s half-sister and now a famous actress Ashley Judd was born. In 1972, Naomi Judd and Michael Ciminella got divorced, and Wynonna along with her mother & sister moved to Kentucky by the year 1976.

Wynonna had an impoverished childhood. She was drawn towards the art of music after listening to country music that her mother used to hear. As a Christmas gift, Wynonna received a guitar and quickly learnt to play it. She was very close to her mother and in 1979; she took up her mother’s maiden surname Judd. In the same year, the two moved to Nashville, Tennessee in search of opportunities for building their musical career. At that time Nashville was known as the country music capital of the world.

Wynonna Judd's career began alongside her mother when the duo was signed up by the label RCA Records in 1983. They started their journey as a duo called ‘The Judds.’ In between the years 1983 to 1991, The Judds struck gold at the country music world by belting out more than 23 hit singles and selling over 20 million albums worldwide. They were not just the biggest-selling duo but also eclipsed all major music awards winning more than 60 music awards. In their career of six years, the pair won many awards including 5 Grammy Awards, 8 Billboard Music Awards and 9 Country Music Association Awards.

The highly successful journey of the Queens of Country Music came to a sudden halt when Naomi Judd was forced to retire after being diagnosed with Hepatitis C, a chronic liver ailment. Though Naomi survived this debilitating period, the duo’s career together almost came to an end.

After the duo broke up, Wynonna Judd embarked on her solo career and signed a contract with MCA Records in association with Curb Records. Her debut solo album ‘Wynonna’ saw the light of the day in the year 1992. The album contained four top-ten hit singles titled ‘She Is His Only Need,’ ‘I Saw the Light,’ ‘My Strongest Weakness’ and ‘No One Else on Earth.’ The album sold over five million copies worldwide and was certified as 5× Multi-Platinum by RIAA. ‘Tell Me Why’ her second album was released in 1993. She again hit the jackpot as five of the album’s songs became chartbusters, and it became a platinum-selling album. In the same year, she recorded her biggest pop hit by lending guest vocals to Clint Black’s single ‘A Bad GoodBye’ from the album ‘No Time To Kill.’

Wynonna Judd third solo album was titled ‘Revelations’ and was published in 1996. Though her third album also became a platinum-selling record, it was only the album’s fourth song ‘To Be Loved by You’ that managed to become a hit while the remaining failed to make a mark. Her fourth and final album with MCA Records ‘The Other Side’ diverted from country music and had more focus on blues and rock sound. The 1997 album was a big letdown as compared to her previous three and managed to earn a gold certification only. MCA Records soon released a series of her greatest hits in an album titled ‘Collections.’ After the release of ‘Collections,’ Judd left MCA Records and inked a deal with Mercury Records.

With the dawn of the new millennium, the queens of country music, Wynonna and Naomi Judd reunited once again for a tour that was set to begin on New Year’s Eve. Wynonna’s fifth album ‘New Day Dawning’ released just a month later and was the first album to be co-produced by her. The album was moderately successful. She again collaborated with Curb Records for her sixth studio album ‘What the World Needs Now Is Love’ which was released in August 2003.

Wynonna Judd has collaborated with many musicians encompassing a wide variety of genres like country, rock, pop, gospel, jazz and many more. Some of her well-known collaborations are with artists like Clint Black, Michael English, Kenny Rogers, Kelly Price, Natalie Grant, Patti Labelle, Travis Tritt and Tanya Tucker.

Wynonna Judd is not just a musician par excellence. She is an actor, writer, and philanthropist. In 2005, Wynonna’s autobiography ‘Coming Home to Myself’ was published and it became a New York Times bestseller. She released her first novel ‘Restless Heart’ in the year 2011.

Wynonna and Naomi Judd were often seen as guests on The Oprah Winfrey Show. She has also appeared in guest roles on various television shows. Wynonna was also a part of the 16th season of Dancing with the Stars where she partnered with Tony Dovolani.

Wynonna Judd is a well-known philanthropist and has been working with many charitable organizations. She has teamed up with Habitat for Humanity and was the United States Ambassador for Youth Aids awareness. Wynonna was honoured with USO's Merit Award for her contributions to all divisions of the United States Armed Forces. She was also nominated for ‘Tennessean of the Year’ award and has received ‘GI Spirit Award’ in 2013.

Wynonna Judd met her first husband Arch Kelley III in 1993. The couple gave birth to their love child Elijah Judd on December 23, 1994. Wynonna had to face severe criticism in the country music world for having a child out-of-wedlock. She eventually married Kelley in 1996 when she was pregnant with their second child, Grace Pauline. The couple parted ways in 1998, two years after the birth of Grace.

On November 22, 2003, Judd married her former bodyguard D.R. Roach. But their marriage came to an end in 2007 when Roach faced criminal charges for sexually assaulting a 13-year-old girl. She began dating Highway 101 drummer and musician Cactus Moser and announced her engagement on December 24, 2011. The two tied the knot on June 10, 2012, in Tennessee.