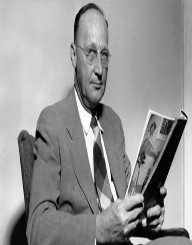 John Scopes, the science teacher who was prosecuted for teaching Darwin's Theory of Evolution was born John Thomas Scopes on the 3 August 1900 on Paducah, Kentucky in the United States. His parents Mary Alva Brown and Thomas Scopes were farmers and Scopes had four sisters. When he was a teenager, the family relocated to Illinois.

After graduating from university, John Scopes worked as a substitute teacher at Rhea County High School where he was also employed as the school’s football coach.

Charles Darwin’s Theory of Evolution was a controversial subject in the early part of the 20th century, and this resulted in the Butler Act which made teaching evolution in Tennessee a misdemeanour. The bill had been put forward by John W. Butler in the Tennessee House of Representatives in 1925 and had been unanimously passed. The American Civil Liberties Union opposed the Butler Act and were determined to challenge it legally.

Initially, the idea was to gain publicity, and the ACLU met with a local businessman, lawyers, and the school superintendent. This group asked John Scopes to admit to teaching Darwin's Theory of Evolution in his science class so they could challenge the legislation. Scopes agreed to do so and was duly prosecuted. His trial became known as the Scopes Monkey Trial. Anti-evolution politician and attorney, William Jennings Bryan represented the prosecution and Clarence Darrow, a well-known and successful attorney represented Scopes. Scopes was found guilty and fined.

John Scopes did post-graduate studies at the University of Chicago in geology. He found it difficult to find job opportunities in Tennessee and moved to Kentucky in the early 1930s. He tried his hand at politics but had no success. He then worked in the oil industry as an oil engineer until his retirement in the mid-1960s. He left a memoir, Center of the Storm: Memoirs of John T. Scopes which was published in 1967.

John Scopes was married to Mildred Walker, and they had two children. Scopes died on the 21 October 1970 in Shreveport, Louisiana from cancer. He was 70 years of age.