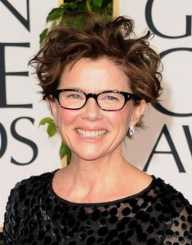 Annette Bening is an American actress. She is known for films including Bugsy, The Grifters, and American Beauty.

Annette Carol Bening was born on May 29, 1958, in Topeka, Kansas. Her parents were Arnett Grant Bening, an insurance salesman, and Shirley, a soloist and church singer. She has two older brothers and one older sister. The family moved to San Diego early in her childhood.

Annette Bening was first exposed to drama in high school.  She graduated from Patrick Henry School in 1975. She attended San Francisco State University before continuing at the American Conservatory Theatre

Annette Bening started her acting career with the American Conservatory Theatre. She found work on the stage, eventually moving to New York and found some success with Broadway. While her first film was The Great Outdoors in 1988, the pivotal point in her career came with the 1990 film The Grifters. It earned her the first Oscar nomination.

She co-starred with Warren Beatty in the 1991 film Bugsy. She discovered she was pregnant after filming wrapped up. The two married and remained married ever since. Motherhood did not stop her from acting altogether.

She co-starred with Michael Douglas in the 1995 film The American President, then transitioned from comedy to Shakespeare as Queen Elizabeth in Richard III. American Beauty earned her a second Oscar nomination while Being Julia gave her a third. In 2010, she was nominated again for The Kids are All Right.

Annette Bening is still taking on new roles from 20th Century Women and Rules Don't Apply. She has more films in post-production for 2018 and 2019.

Annette Bening married J. Steven White in 1984. They divorced in 1991. She later married her co-star from the film Bugsy Warren Beatty in 1992. The couple has four children.

Annette Bening supports fundraising efforts for breast cancer research. She also supported Planned Parenthood which was part of the storyline in her film 20th Century Women.

Annette Bening won the Golden Globe for Being Julia, and The Kids Are All Right. Bening was also nominated for Featured Actress Tony award in 1987 for her role in Coastal Disturbances.