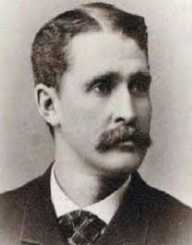 Randolph McCoy was born on 30th October 1825 in Tug River Valley, Kentucky, in the United States. His parents were Daniel and Margaret McCoy, and he had 12 siblings.

Randolph McCoy married his first cousin, Sarah "Sally" McCoy, in 1849. The couple had 17 children. McCoy lost five of his children in the infamous feud between the McCoys and the Hatfields.

The leaders of both the McCoy family and the Hatfield family fought for the Confederates during the American Civil War. McCoy, himself, served in the Confederate Army.

Near the end of the 1870s, Devil Anse Hatfield disputed with Perry Cline over 5,000 acres of land. Cline was the cousin of McCoy. Both Cline and Hatfield held the title for the property.

Hatfield filed a civil suit against Cline, and he won. The McCoys believed the court was "Hatfield friendly."In 1878, McCoy brought charges against one of the Hatfield's for stealing a hog. At the time, the allegation was a serious offense, as hogs were very valuable.

Bill Staton, relative to both families, made a statement, and the case was decided in favor of the Hatfields. The verdict fueled the feud even further. The authorities arrested Sam and Paris McCoy concerning Staton's death, but they were both acquitted.

On 1st January 1888, Cap Hatfield and Jim Vance, along with other members of the Hatfield family, attacked McCoy's cabin. The Hatfield's killed several members of the McCoy clan, and severely beat McCoy's wife. Although she survived, she was permanently disfigured.

McCoy escaped to the woods with his other family members, but his children suffered from frostbite due to inclement weather. He moved to Pikeville, Kentucky, with the remainder of his family. McCoy lived there for the remainder of his life, a bitter and grieving man. He earned a living by operating a ferry.

Randolph McCoy's house still stands at the corner of Main Street and Scott Avenue. When the feud finished, McCoy had lost his wife, and seven of his children.McCoy died on 28th March 1914, after burns received from a cooking fire. In June 2003, McCoy cousins met with Reo Hatfield. As a result, the two families signed an official truce at long last.