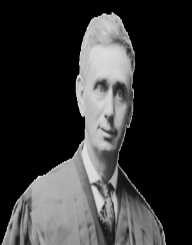 American lawyer and associate justice Louis Dembitz Brandeis was born on November 13, 1856 in Kentucky. He came from a cultured Jewish family, who often talked about subjects related to history, politics, and culture. As a child, he often read writings by Goethe and Schiller, and listened to Beethoven and Schuman. Although the family was Jewish, they did not practice Judaism, but instead celebrated Christian holidays along with the community. In later life, influenced by his uncle, Brandeis became an active member of the Zionist movement.

Louis Brandeis was a serious student and enjoyed learning languages, music and politics. He was the top student in his class and graduated from Louisville Male High School when he was 14 years old, receiving the highest honors. The family anticipated an economic downturn in the country, and to avoid it, moved to Europe in 1872. During this time, Brandeis attended the Annenschule in Dresden, Saxony.

In 1875, Louis Brandeis and his family returned to the United States, and he entered Harvard Law School. During his time in Harvard, the school changed its methods to using the interactive Socratic method with prior cases as a basis for discussion. His eyesight started to give up, since Brandeis had to read a large amount of material, usually under a gaslight. Doctors suggested that he would give up school entirely, but he started to pay fellow students to read textbooks loud. Despite the difficulties he experienced, Brandeis became a valedictorian and achieved highest grade point average in the history of Harvard Law. He graduated in 1875 when he was just 20 years old.

After finishing law school, Louis Brandeis started to practice law in St. Louis, Missouri. After a brief period, he returned to Boston and set up his law firm Warren and Brandeis. Samuel Warren was his classmate from the university. One of their most famous works was the article on Harvard Law Review “The Right to Privacy.” The article argued that citizens should be given privacy and their photos or details about their life should not be permitted to be published by the press.

During his time as a lawyer, Louis Brandeis was advocating against monopolies and large corporations. He was a passionate advocate of free speech. Brandeis gained the reputation as “the people’s attorney” since he refused payment for his services. One of his most notable cases was when he helped to save the Boston subway system and broke up the New Haven Railroad company. He also fought to set limits of work hours and determine the necessary conditions for workers to work in. In the Muller v. Oregon case, Brandeis included historical, sociological and scientific data to support his case.

Louis Brandeis was first offered a position in the White House in 1913 when President Woodrow Wilson made him an offer. Brandeis declined and instead focused on his writing, publishing the Other People’s Money and How the Bankers Use It the following year. In 1916, Wilson nominated Brandeis to the Supreme Court.

At the Supreme Court, Louis Brandeis and his colleague Oliver Wendell Holmes Jr. were often against the prevailing opinion at the court. He opposed unlimited governmental power and the free interpretation of the term “industrial liberty.” He continued to oppose the control of economics by only a few people and supported the public at large.
Brandeis was a supporter of the New Deal propositions during President Franklin Roosevelt’s office. However, he was strict about his views on limiting presidential authority. He was amongst the judges who declared the 1935 National Industry Recovery Act unconstitutional. Brandeis retired in 1939.

Louis Brandeis was married one time with Alice Goldmark. The couple married in 1891 and had two daughters together.

Louis Brandeis believed that establishing and believing in a Jewish homeland; it will become easier to combat anti-Semitism. Brandeis died in 1941 after suffering from a heart attack. During his life and after his death, Brandeis received several awards and honors. Most notably, the Brandeis University in Waltham, Massachusetts is named after him. There are also several awards at the school named in his honor.