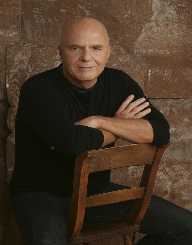 Wayne Dyer is a self- help writer and motivational speaker, focusing on self- improvement.

Wayne Walter Dyer was born on 10th of May 1940 in Detroit, Michigan. His parents were Melvin Lyle Dyer and Hazel Irene Vollick, both from Ontario, Canada.

After his father walked out, leaving his mother with three young boys, Wayne Dyer spent some time in orphanages and foster homes. He studied at Denby High School.

After graduation, Wayne Dyer served as a Navy Officer in the United States Navy from 1958 to 1962.

Wayne Dyer graduated from Wayne State University, receiving a Doctor of Education in Counselling, for a dissertation about Group Counselling Leadership Training.

After gaining his doctorate, he worked as a high school guidance counselor in Detroit, and served as a professor of counseling psychology, lecturing at St. John's University in New York City. Aside from having an academic career, he had a private practice and published in journals.

Wayne Dyer was asked to document his theories into a book by an agent, ‘Your Erroneous Zones’ was published in 1976 and became an international bestseller.

The book featured principles of self-discovery and personal growth; he quit his job to promote his book.

The popularity of his first book leads to television talk shows including ‘The Today Show,’ ‘The Tonight Show’ and. ‘

The Oprah Winfrey Show’. Adding to his talk shows, he added lecture tours, PBS programs, and audiotapes into his brand.

In 1992, Wayne Dyer wrote Real Magic, a book that included components of spirituality. He talked about feeling a shift in his thinking that leads to him exploring the spiritual side of human experience.

Wayne Dyer was accused of plagiarism, t\stealing lines from Tao Te Ching written by author Stephen Mitchell, the suit was dismissed in 2011.

Stephen Mitchell, He was also admonished publicly by psychologist Albert Ellis for failing to give credit when it is due, therefore was unprofessional and unethical. Wayne Dyer never admitted wrongdoing.

Wayne Dyer was awarded the Golden Gavel Award from Toastmasters International in 1987, a recognition of his contribution in fields of communication and leadership. He was inducted into the International Speakers Hall of Fame.

Wayne Dyer married Judy and had a daughter, Tracy. His second wife was Susan Casselman, but they had no children together. He married Marceline, and she had two children from previous marriage.

Wayne Dyer and Marceline had three more children together before separating in 2003 after twenty years of marriage. He was diagnosed with leukemia in 2009, he had cancer treatments and attributed his remission via spiritual healing.