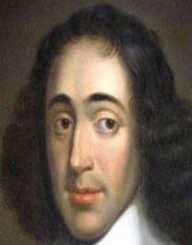 Benedict de Spinoza, the Dutch philosopher of Jewish ancestry, was among the important post-Cartesian philosophers and is famous for his rational ideas and played an important role in European enlightenment.

He was a leading philosophical figure of the Dutch Golden Age in the 17th century. His works led to the foundation of the Spinozistic or Naturalistic school of philosophy. His masterpiece, the Ethics, was published after his death in 1677. In it, he attacks various Cartesian positions and treats God and nature as indistinguishable.

Benedict de Spinoza was born on 24th November 1632 in a Jewish neighborhood of Amsterdam, Netherlands. His ancestors were of Sephardic Jewish origin who had immigrated to the Netherlands from the Iberian Peninsula to escape religious persecution after the Alhambra decree and under Portuguese Inquisition. The Degree of Toleration issued in 1579 in the Netherlands provided the Jewish people a relatively tolerant atmosphere.

Spinoza's father, Michael, was a successful merchant in Amsterdam. He had three wives, and Spinoza was born from his second wife, Hanna. Spinoza lost his mother at a tender age of 6. Benedict de Spinoza received education in all-male Talmud Torah School. He studied Hebrew, Torah, Jewish scriptures and other subjects at the school.

Benedict de Spinoza discontinued his formal education and started to work in the family business at the age of 17 after the death of his older brother, Issac. He began studying Latin from Franciscus van den Enden at the age of 20. It is speculated that he introduced him to modern philosophical thoughts.

Benedict de Spinoza, could not handle the family business properly after the death of his father in 1654. He left the failing business in the hands of his younger brother, Gabriel. By this time, he had made a reputation of being a heretic.

As a result, he was excommunicated from the Jewish community in July 1656 by a writ of Herem issued by the Talmud Torah congregation of Amsterdam. He didn’t convert to Christianity, but he was buried in a Christian cemetery in The Hague.

Benedict de Spinoza, devoted the last 21 years of his life to philosophy and writing while earning a living by giving private philosophy lessons, grinding lenses and making optical instruments. He lived a simple life and dedicated himself to the philosophical and other related studies.

Benedict de Spinoza had to move to the nearby village of Ouderkerk aan de Amstel when he was expelled from Amsterdam under pressure from orthodox religious groups after his excommunication. He returned to the city after some time and remained there for next four or five years during which he wrote his first philosophical work, ‘Short Treatise on God, Man and His Well-Being,’ which remained unpublished during his lifetime.

Then in around 1661, he moved to Rijnsburg after he was attacked with a knife by a person as he walked out of a theatre in Amsterdam. His first work The Treatise on the Emendation of the Intellect remained incomplete.

But Spinoza began his work on Ethics and Descartes’ Principles of Philosophy in Rijnsburg, and he returned to Amsterdam in 1663 to get the latter work published. It is his only work published under his name in his lifetime.

In the same year, Benedict de Spinoza relocated to Voorburg. In 1670, he published his Theological-Political Treatise anonymously. The treatise contained biblical criticism and defended the thought of secular and constitutional government for Europe. Later, the authorship of the treatise got revealed, and the Synod of the Reformed Church banned it in 1674. Spinoza spent the last six years of his life in

The Hague where he continued his work on Ethics, started an unfinished Hebrew grammatical work and a Dutch translation of the Bible. His health began deteriorating in 1676, and he eventually died prematurely on 21 February 1677, probably due to silicosis as a result of his lens grinding work.

Benedict de Spinoza's Ethics is considered to be a masterpiece in the field of philosophy in which he builds the case for Substance Monism. He proposed that there is no dualism between God and the world. God is not a separate entity outside the world. Instead, the entire natural world or the universe is God, and all things are just the modes of that God. According to Spinoza, God is not like the man and God has been anthropomorphized.

God is indifferent to human actions, aspirations and even his existence. Spinoza questions Descartes' concept of ‘free will’ in this work. He also proposes that Nature has infinitely many attributes including thought and extension.

His approach was closer to Stoicism and Epicureanism. He proposed that it was impossible to break the laws of nature and the miracles have a rational and scientific explanation. He holds that good and evil depend on our frame of reference and they change continuously according to our biases and parameters.

Benedict de Spinoza was a strong proponent of determinism. According to him, everything in the world was already determined, and the events were fixed. Nothing is contingent in the world. He believed in principles of tolerance, religious freedom, and separation of church and the state. He opposed Hobbes' Leviathan and his social contract theory.

His views are authoritarian like Plato and Aristotle in the case of the theory of Power. Various writers have noted the striking similarities between his thoughts and the Hindu Vedanta philosophy.

Benedict de Spinoza and his works are recognized as the beginning of Jewish Modernity. He influenced a vast range of intellectuals ranging from Marxist thinkers to scientists such as Albert Einstein.

His works had a profound impact on Hegel, Rousseau, Marx, Wagner, George Eliot, Nietzsche, Freud, Santayana, John Locke, Leo Strauss, and other such famous people. Spinoza’s portrait featured on Dutch banknotes until 2002 when Euro was introduced. He is an important historical figure in the country, and its highest scientific award is named after Spinoza.