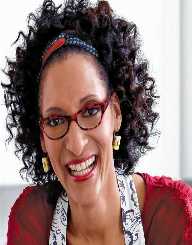 Carla Hall is a celebrity chef and TV personality.  She gained national recognition after competing on a reality show cooking competition.

Hall was born on May 12, 1964, in Nashville, Tennessee.  Her mother is Audrey Hall.  Carla's grandmother Thelma was a big inspiration in her love for cooking.

Hall attended Howard University in Washington, DC.  She earned her accounting degree in 1986.  When she decided to pursue a career in culinary arts, she attended L’Académie de Cuisine in Gaithersburg, Maryland.  She earned her certification in the mid-1990s.

After college, Carla Hall went to work as a  CPA for Price Waterhouse.  However, as time went by, she discovered that the career path did not follow her passion. She quit her job and went to Europe in 1988 where she worked as a runway model and posed for photo shoots. Upon her return to the United States, she followed her love for cooking and attended the L’Académie de Cuisine. She worked as a sous chef and executive chef before starting her own catering company.  Alchemy Caterers started in 2001.  She later renamed it to Alchemy by Carla Hall.

Hall's recognition got a huge boost when she competed on the reality cooking show Top Chef in 2008.  She prepared her food with love and care and made it to the finals. When she got excited, she would shout “Hootie Hoo!”, A phrase she and her husband used to find each other. She returned to Top Chef All-Stars in 2010.  While she did not win the top prize, she did win the title Fan Favorite.

In 2011, Hall started her 7-year job as co-host on the daily lifestyle shows The Chew.  She worked with fellow chefs Mario Batali and Michael Symon as well as Clinton Kelly and Daphne Oz.  In 2018, The Chew was canceled.

Despite the cancellation of The Chew, Carla Hall remains busy with her businesses.  She runs Alchemy and Carla Hall Petite Cookies, and she writes cookbooks.  Her next book Carla Hall's Soul Food:  Everyday Celebration is due out on October 23, 2018.

Carla Hall married Matthew Lyons in 2006. She has one stepson, Noah.

In 2015, Hall traveled to Mozambique with CARE, a global leader working to end poverty.  She continues to work to find an end to global hunger.

Cooking with Love:  Comfort Food that Hugs You (2012)
Carla's Comfort Foods:  Favorite Dishes from Around the World (2014)